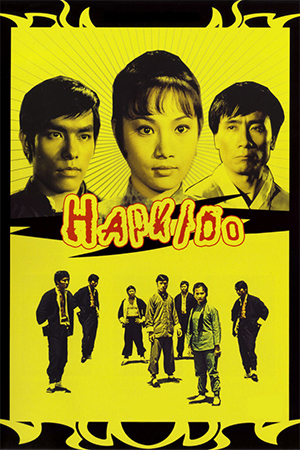 Three Chinese students (Angela Mao, Sammo Hung and Carter Wong) leave Korea after five years training in the martial arts of Hapkido. Back home they set up their own school, only to fall foul of the rival Black Bear school run by some nasty Japanese. Despite wanting to lead a peaceful existence, the three find themselves at the centre of many fights as they aim to protect their fellow villagers, their school and ultimately themselves.

A simple storyline that is backed up by an ample supply of martial arts sequences; this is a film that makes no bones about being a showcase for the impressive fighting skills of its lead actors. And all the better for it. It is refreshing to watch a film that has just one thing on its mind: tons of action. There is nothing very original about ‘Hapkido’s plotline but it serves the action well and all the main performers put in solid dramatic performances. But it is the fight scenes that really make ‘Hapkido’ stand out. Considering it was released in 1972, the film’s choreography still holds up, and many of the fights are often brutal and bone crunchingly realistic. A very young Sammo Hung struts his stuff in a number of fights and shows he was well on his way to becoming one of the greatest martial arts superstars even this early on in his career. Hapkido founder, Ji Han Jae, also shows up in the earlier scenes as the trio’s master and gets to cut loose on his students. But the film belongs to its leading lady, Angela Mao. The godmother of 70’s kung fu action, Mao blazes onto the screen in a series of fights, the standout being a tense confrontation where she wields a steel rod while taking on a Samurai sword brandishing bad guy. Lithe, tough and one hell of a kicker, Mao is a true martial arts master and it’s cool to see a lady taking on the lead role in such a male dominated genre.

Presented in a beautiful wide screen format on the HKL DVD (and featuring a bevy of ‘blink and you’ll miss em’ cameos from Yuen Kwai, Jackie Chan, Billy Chan and Yuen Biao), ‘Hapkido’ is a must have movie and a true classic of old school martial arts action.