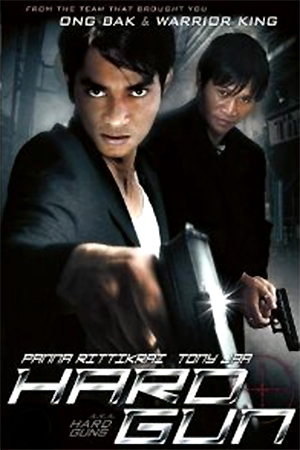 After a robbery goes wrong, a gang of thieves are forced to take refuge in a rundown shack. When the police launch a raid on their hideout, one of the thieves is killed and his brother (Panna Rittikrai) swears to get revenge on Pitak, the cop responsible for firing the fatal bullet. Following his failure to capture the criminals, Pitak is suspended from the force so he heads back to his hometown to spend some time with his family. Unfortunately things are not as happy as they once were, as his father is still struggling to cope with his wife’s murder and his sister has taken to gambling. As he attempts to repair the issues at home, Pitak runs into more trouble when the remaining thieves come rolling into town determined to take their bloody revenge…

If you’ve seen any of the international cover art for ‘Hard Gun’, then you’ll probably be expecting to see a gritty cop thriller starring Tony Jaa and Panna Rittikrai. Unfortunately though, this is most definitely not the case as both actors have little more than extended cameos and the film is better described as a comedy (or just one big joke) with a smattering of unnecessary action. Set primarily in a local village, the film seems to spend the majority of its running time on tedious slapstick routines that come right out of the Benny Hill book of comedy. The little plot is similarly aggravating, particularly the endless “you killed my brother/wife/puppy” scenarios that seem to arise from just about every character involved. There’s also a very odd overall tone to the movie, as one moment we’re supposed to be chuckling along with a gurning competition and the next someone is being stabbed in the groin with a very real looking knife. The whole thing is very unsettling and I’d say it’s highly unlikely that many of you will be capable of suffering through to the end.

Considering it involves both Rittikrai and Jaa, you’d assume that ‘Hard Gun’s action scenes will at least provide something of merit. Unfortunately they don’t, but they are still the only minor plus point that the film has to offer. Most of the scenes, of which there are very few, are disappointing and about as schizophrenic as the rest of the movie. The shoot outs in particular, are extremely bad as they involve a number of ridiculous dives and flips that just seem so out of place and they constantly distract. Thankfully though, there is still one reason to watch to the end and that is the final battle. While far from being the best fight that Rittikrai has devised, it’s a good chance to catch an early glimpse of Tony Jaa and there are undoubtedly a few welcome flashes of his impressive abilities. It’s just a shame that he is stuck playing the bad guy and gets wiped out in style that is very reminiscent of a scene from Jackie Chan’s ‘The Young Master’.

‘Hard Gun’ is an extremely poor excuse for a movie that is often a real chore to sit through. The only reason I can find to recommend it is to see a young Tony Jaa in action, but even this isn’t enough of a reason to sit through all of the surrounding “comedy” sequences. Do yourself a favour and just watch the final fight on YouTube, you’ll be far better off.