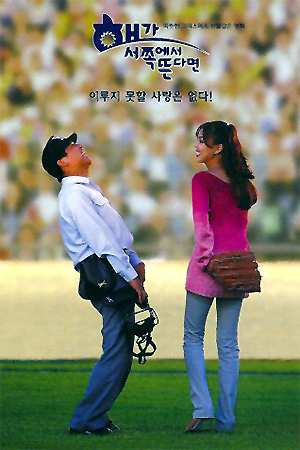 Traffic officer Beom-Soo and aspiring actress Hyun-joo meet one day when the latter crashes the car she is learning to drive in and the former is given the opportunity to coach her. A very formal relationship develops into a close friendship and Beom-Soo is quickly smitten by his new friend. Hyun-joo, though, is about to leave to further her studies in the West and, despite a heart-felt confession of love by Beom-Soo, disappears seemingly forever. A few years have passed by and Beom-Soo has realised his dream of becoming a baseball umpire and Hyun-joo has finally achieved stardom in Korea, albeit under a different name. When he suddenly realises who this new Korean star is, Beom-Soo decides to find a way to contact her and re-ignite the friendship they held so dear. The only problem is getting past her entourage to get the opportunity to speak to her, yet his new occupation contrives a way to realise his dream.

Another day and another slickly made, exquisitely handled and admittedly emotionally manipulative Korean romantic drama. It seems that the sub-genre has pretty much reached its apex in the hands of a variety of Korean film-makers and their undeniable skill is to take pedestrian storylines and breathe new life into them. This means that, while on paper films such as this rarely tantalise the imagination, the knowledge of just how accomplished much of these productions are makes each of the better ones develop their very own identity. There are inevitable comparisons with the way Hollywood handles its romantic dramas, but Korea has carved out a niche in the market that means their products seem genuinely moving while their Western rivals appear hopelessly contrived and over-cooked.

‘If The Sun Rose In The West’ nudges our emotions in the right direction thanks to ample use of long, lingering shots of the sympathetic leads and a pounding soundtrack that is full of well-known Western pop songs. The denouement is also a flamboyant show of affection that would normally appear synthetic, but Lee Eun fashions a story that makes the viewer eager for such a rousing conclusion. We are quite happy for to forgive the narrative for taking such an ostentatious turn at the end only because the director has cleverly used enough of the scenes prior to this as a way of helping us get to know the lead couple.

While the plot hints at ‘Notting Hill’, ‘If The Sun Rises In The West’ appears far less manufactured and there is a welcome lack of the needless scenes of well-heeled gentrified city-folk that was the obvious failing of much of Richard Curtis’ writing. Beom-Soo is timid without being caricatured and has a grounding in reality that makes his actions more believable than they might otherwise be. The beautiful Koh So-Young, an actress who had impressed me with her quiet fragility in ‘Love Wind, Love Song’, illuminates this popularist fable and lends her character some much needed humanity. Her initial rejection of Beom-Soo may have us rooting for the leading man, but as she re-enters the story, Hyun-joo develops into the perfect romantic ideal. Unlike Julia Roberts in ‘Notting Hill’, Hyun-joo never becomes aloof and her gradual feelings towards Beom-Soo are not just a famous star condescending to be with a member of the general public.

Other Korean films are probably better examples of how the country has perfected this kind of gentle love story, yet ‘If The Sun Rose In The West’ accomplishes its modest directives and creates two characters we quickly warm to throughout their moments together. Lee Eun utilises tried-and-tested genre techniques, but it is hard to be too resistant to these when the story moves along so effortlessly.