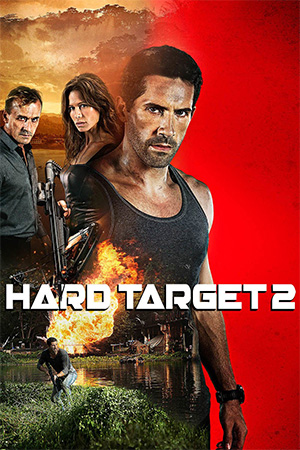 A rather belated sequel to John Woo’s original Jean Claude Van Damme starring classic, ‘Hard Target 2’ (while not reaching the dizzying heights of said classic) is a fun and worthy follow up. Bolstered by the always great and on the rise Scott Adkins, directed by the ever reliable sequel machine Roel Reine (‘The Man with the Iron Fists 2’) and this time featuring a jungle setting for all the hunt and kill action to play out, ‘Hard Target 2’ hits the ground running and rarely lets up. While eschewing the more heroic bloodshed aspect of Woo’s US debut, Part 2 ups the martial arts quota while still featuring an impressive amount of vehicular destruction and explosions as Adkins runs for this life through the Thai jungle when he’s set up by Robert Knepper’s nasty hunts-people-for-profit bad guy. So business as usual as this sequel takes the ‘Hard Target’ template and runs with it.

While it doesn’t re-invent the formula to any great shakes (and why should it really: it’s a ‘Hard Target’ film and one wants to see an action star hunted before turning the table on the hunters and that’s what one gets!) the new setting, Adkins leading man status (and considerable fight skills) and some lush photography make ‘Hard Target 2’ a fun ride. The bad guys make for solid opponents with Robert Knepper obviously relishing his bad guy hunter role (and even channelling a little of the great Lance Henriksen) and director Reine mounts the action with considerable verve and some fantastic photography. The fights may be a little short but there is plenty of chase action, explosions and even a boat chase meaning the action is often varied and inventive. There are also several nice nods to the original so it does feel like an actual sequel: leather clad bad guys chasing their foe on black motorcycles, cool looking and deadly crossbow weapons, a bad ass right-hand man for the main bad guy (this time played by the ace Temuera Morrison) and even Woo’s doves and Henriksen’s cool ass gun from Part 1 make an appearance.

If it drops the ball at all it’s in the aforementioned too short fight sequences. They’re certainly good, Adkins flexing his considerable kicking skills on occasion, but when you have the great Jeeja Yanin (‘Chocolate’, ‘Raging Phoenix’) on hand you need to give her more than a 60 second fight scene with Adkins. She turns up late in the action and just as she’s cutting loose it’s all over too quickly and this no good reviewer would have much rather seen an extended fight scene between her and Adkins than another boat chase! Also, while the bad guys are good, perhaps a bit too much time is given to them bickering, shouting, and generally being evil when the hunt action should be ramping up. Villains make for interesting characters but it doesn’t mean one wants to hear them always banging on about how evil they are when the action should be kicking off.

Still this is as good as a belated direct-to-DVD sequel to a John Woo/Jean Claude Van Damme classic gets, is for the most part a well staged action film and is another great showcase for the talented Scott Adkins. Another dose of motorcycle-chasing, crossbow-shooting, human-hunting action wouldn’t be a bad thing at all.