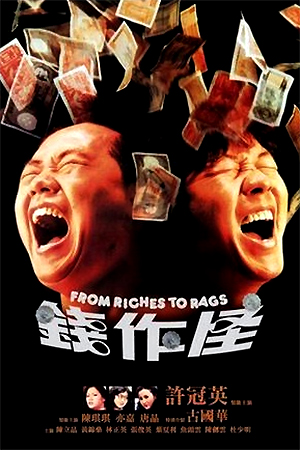 Ricky (Hui) and his loyal friend Fatso (Koo) are two of Hong Kong’s hardworking underclass who, like everyone in the same position, dream about being rich. Unfortunately, the chance of achieving his goal is some considerable way from Ricky and he instead earns a meagre crust at a bottling plant with Fatso by his side. Also in his thoughts is his unrequited love for elegant film star JoJo, another unobtainable dream to distract him. An impulse visit to a fortune teller offers Ricky some excellent news: he will soon be a wealthy man and achieve all of the numerous daydreams that occupy his mind. Unfortunately he is also told that he will not enjoy his fortune for long and faces an untimely death shortly after hitting the jackpot. As predicted, Ricky wins the Hong Kong lottery and throws his money around in the manner of those he previously envied, enjoying the lifestyle of the rich and famous. However, his own mortality continues to hound him and a trip to the doctor following a bout of stomach cramps reveals his worst fears. Ricky contemplates suicide after hearing this news, though before he can complete the attempt he manages to befriend another distraught victim who agrees to organise a hitman to solve Ricky’s problems. Now he just sits and waits for the hitman to make his move and put the unfortunate loser out of his misery. A further complication is added to the blend when Ricky’s doctor phones him to apologise for a mistake – his earlier diagnosis was wrong and Ricky is in fact perfectly healthy. Now he has to avoid the killers who are determined to complete their assignment and live to savour the remainder of his wealth.

No matter what films John Woo has in store for us in the future, ‘From Riches To Rags’ will almost certainly be among the most bizarre he’s made. What starts off as a standard 80s Hong Kong comedy takes a much darker turn in its final half hour and turns what was initially light-hearted humour on its head. The final scene, which takes place in a eerie mental institution, is strangely unsettling and an out-of-place ‘Deer Hunter’ pastiche. The reasons for these sequences is partially explained by an overall message against greed and materialism that is reasonably successful. Nevertheless the sheer awkwardness of the film’s two extreme tones is perhaps a good indication of John Woo’s lack of patience with comedy; it was already clear where his heart really was. Whereas a Michael Hui or even a Clifton Ko manages to direct these zany comedies with a needed measure of consistency, Woo struggles to keep the storyline interesting throughout the duration. Therefore, this 100 minute film drags considerably after the hour mark, losing most of its momentum.

The greatest asset of ‘From Riches To Rags’ is undoubtedly Ricky Hui and it is his presence that lifts the film in its lesser moments. Hui was always the underrated Hui brother, the innocent butt of most of the jokes who tended to be forgotten by many viewers. However, just as he was such a vital part of the Hui brothers team, here he keeps the film together even when director Woo loses control. Ricky is always a pleasure to watch especially when he’s playing the oppressed loser stumbling from one misfortune to another. Ricky Hui therefore ensures that this is entertaining despite its very unpredictable nature making it an acquired taste.