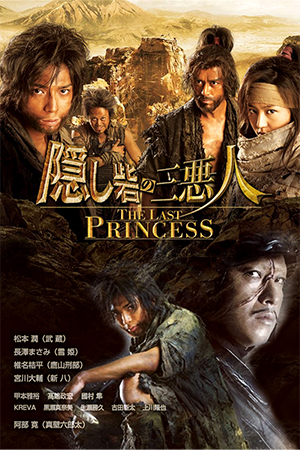 Now re-making/updating an Akira Kurosawa classic is a risky and, some might say, downright mad proposition and needless to say this new version of Kurosawa’s much loved ‘The Hidden Fortress’ doesn’t come anywhere close to the magic of the original. That said, and something that will no doubt be repeated by many other critics and enraged Kurosawa/classic cinema fans, this modern update isn’t that bad. In fact, with its slick visuals, considerable budget and likeable cast, it’s a lot of fun.

A Princess, Yuki-hime, and her loyal retainer, Rokurota, are travelling across a war torn land, in the grip of evil warlord Yamana, attempting to transport her prefecture’s treasury of gold bullion to a safe haven. Disguised as lowly peasants they encounter two escapees from a nearby hard labour gold mine, Takezo and Shimpachi. They form an unlikely rag-tag group of rebels, Takezo and Shimpachi unaware to begin with of the Princess’ identity, as they make their way through the dangerous wilderness, edging ever closer to Yamana’s stronghold hidden deep in the mountains.

Ok so ‘The Last Princess’ doesn’t exactly retain the subtleness or character definition of Kurosawa’s film: this is a big blockbuster type film and it’s loud and proud. Not to say its characters aren’t drawn well as the quartet of heroes offer an engaging and likeable bunch for the viewer to get to know as their journey progresses. Casting a member of a Japanese boy band as one of the leads (Jun Matsumoto as Takezo) may not be the wisest choice for a Kurosawa re-imagining but he and the rest of the cast, including a requisitely tough and gruff Hiroshi Abe (‘Chocolate’) as the no-nonsense Rokurota, apply themselves well. Director Shinji Higuchi (‘Sinking of Japan’), despite coating proceedings in a slick visual look, manages to retain quite a bit of grit with the heroes suitably grubby and downtrodden and the villains vicious and enjoyably boo hiss. He also orchestrates some impressive mayhem and Samurai action come the final stretch, though the film could have done with a couple more action beats and a bit less shouting and mugging from some of the supporting cast.

The whole thing rollicks along at a fair clip and the film has a kind of charming, uncomplicated 1980s fantasy action film vibe to it making it a much more enjoyable experience than one might expect. No doubt many will not be able to get past this being a remake of a Kurosawa classic (and his film, of course, is still the better version) and be mortified at the use of CGI and excessive blood spurts in some scenes but in its own right, ‘The Last Princess’ is an enjoyable and good looking action adventure romp.