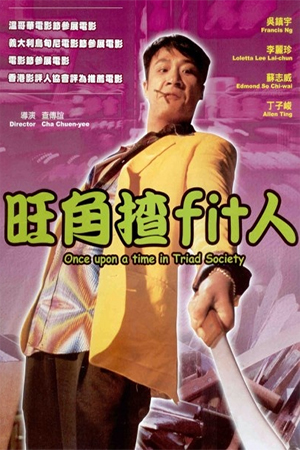 A film about the life and fables of an ugly little gangster, this movie is the antithesis of the ‘Young And Dangerous’ films. Essentially ‘Once Upon A Time In Triad Society’ plays out as if Kwan from that movie had a life on the side, where he is the leader of a gang doing tricky business with the Yakuza. It is hinted that he has his fingers in prostitution and also likes to make pornos, and within the opening ten minutes he has shot his tailor, tried to rape the man’s daughter and then sold her into sex slavery. This isn’t Mark Gor.

Kwan then bashes in a Yakuza gang leader’s head before getting blown away himself. The bulk of the rest of ‘Once Upon A Time In Triad Society’ is Kwan lying in the hospital; medical staff unwilling to treat him, merely laying a tissue on his chest wound, narrating what might or might not be his life story.

It is a story of two halves, what might’ve been and what probably was. The might’ve been section is fun, showing Kwan as a bumbling crook slowly suffocated and crushed by Triad Society until he becomes the ultimate bastard. The film then twists and essentially Kwan tells you this is bullshit, here’s me as I always was. The film then follows through Kwan from his opening shots as a gangster through to his days as a big man, full of swagger and an army of chopper boys bringing up the rear. He murders anyone in his way, doing away with family and friends alike.

Essentially this film is a black comedy, taking shots at the Triad movie conventions and doing it exceedingly well. ‘Young And Dangerous’ paints hip HK geeks and freaks doing a Triad rave thing in their Day-Glo outfits and having a general hoot. Francis Ng’s Kwan is a pure monster and the world he resides in is just as beastly, the Triad Boyz of Y and D shouldn’t have lasted ten minutes let alone ten films.

The final section follows Kwan, post assassination attempt, battling to stay ahead of the cops and the Yakuza culminating in a ‘True Romance’ style shoot out.

‘Once Upon A Time In Triad Society’ is a great little movie, purely down to Francis Ng in what must be one of his greatest roles. He twitches, snarls, letches and generally cooks up one of Hong Kong cinema’s finest villains.

The movie also boasts some great location work, showing back alleys, markets, bars and shops bright lit by great big flashing neon lights. Take out the Triads and it could’ve been a Lonely Planet doc. The film also boasts a great score, hip hop drums and neat flourishes of big beat keep it pumping along with the jumpy camera work. Everything is kept in motion, a truly fun little journey into the black heart of Hong Kong gangsters.