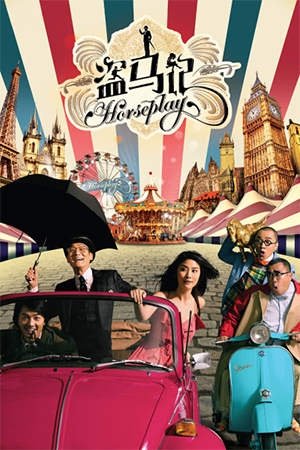 Showbiz reporter Mui (Chen) is determined to be taken seriously as a journalist and when rumours abound that legendary art thief ‘Nine Tailed Fox’ is back on the scene, she spies the perfect scoop. The Foxis aware of the interest his presence is stirring and promises Mui the inside track on his craft if she accompanies him to London for an illegal auction. In pursuit of these two is Interpol agent Ho (Cheng) who wants evidence on Fox for his years of outrageous heists, one of which was a permanent blemish on the law officer’s career. Added to the intrigue are two beautiful assassins backed by a mysterious boss and a pair of somewhat inept historians hired to find the missing piece in a Tang dynasty collection.

‘Horseplay’ is not actually a film: it is an ingenious time warping device that sends viewers back to the Hong Kong cinema of fifteen or so years ago with all of the self-confidence and light-heartedness we were sure was in every frame back then. Ekin Cheng and Kelly Chen are still top box office stars and big budget local films have only a secondary interest in what the Mainland market feels about its product. That could of course threaten to descend into a rose-tinted nostalgia-fest, but somehow ‘Horseplay’ rises above this tendency with some aplomb.

With a zippy caper feel that recalls ‘Tokyo Raiders’, ‘Horseplay’ is much wittier and entertaining than it has any right to be. It’s always nice to see Hong Kong stars lifted out of their usual locales and here the familiar faces are transported to beautifully photographed London and Prague – another reminder of the years when local productions dipped their feet in waters other than China. Add to that a cast that includes an ageless Kelly Chen (who must have been preserved in aspic since 2000) and Ekin Cheng (who must seem like a tall glass of water in the desert these days, given the uninspiring newcomers who pop up in Hong Kong films these days) and you have a film that saunters along with its head held high.

Of course, this could all be the febrile musings of a reviewer living in the past, desperately trying to seek solace from any vague recollection of imagined halcyon days. That might be true. ‘Horseplay’ isn’t some significant milestone in Hong Kong cinema nor was it a film that made even the merest of ripples on its release earlier this year. Yet this is superior entertainment of a light and fluffy nature that somehow feels more sophisticated than anything out at the moment (even though it probably isn’t).