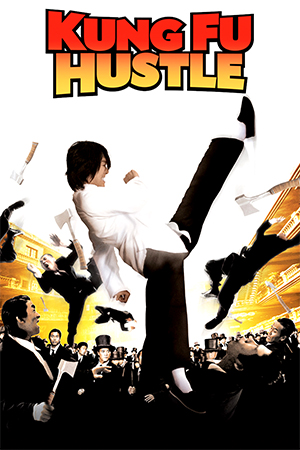 After the huge success of ‘Shaolin Soccer’, many fans eagerly anticipated Stephen Chow’s next project.  When their patience was finally rewarded with the announcement of ‘Kung Fu Hustle’, many hoped that Chow could spoof the martial arts in exactly the same way as he did with sports.  So, does the finished product live up to these huge expectations or is Chow already falling from grace?

Sing (Chow) is a petty thief who aspires to be a notorious gangster as he believes that only the bad are successful.  When he visits a small town and masquerades as a member of the infamous Axe Gang, he uncovers three martial arts masters who are in hiding.  Believing him to be one of their members, the real Axe Gang come to Sing’s aid but are harshly dealt with by the heroic masters who give an impressive display of their skills.  However, by revealing themselves they stir up a hornet’s nest as the Axe Gang undertake a relentless pursuit to exact revenge at any cost.  As Sing finds himself caught between the two sides of good and evil, he is forced to decide whether he should continue his lifelong dream to become a gangster or help out a town in need.  But what can he do when he isn’t even a skilled kung fu master… or is he?

The first thing that is instantly noticeable about ‘Kung Fu Hustle’ is that Stephen Chow seems to be absent for a relatively large portion of the movie.  Now, whether this is because of his extensive off-screen duties or just a purposeful attempt to flesh out the other characters, it remains an extremely noticeable trait that may detract his hardcore fans.  For most though, this will really only be a minor issue as ‘Kung Fu Hustle’ is an extremely entertaining and succinct parody of martial arts movies that is overflowing with originality.  The film offers up a particularly clever take on the material, slyly poking fun at the fact that these heroes have vanished from sight and drawing obvious comparisons with the state of the genre today.  This is aided by Chow’s very distinct brand of comedy that, although slightly subdued in parts, is always consistently amusing and is further enhanced here by some CG effects that make it look like a live-action cartoon.

A movie with ‘Kung Fu’ in the title also raises certain expectations when it comes to the action but it’s important to note that this is a comedy first and a martial arts movie second.  That said though, with notable choreographers like Sammo Hung and Yuen Woo-Ping on board, you can always expect something exciting when it comes to the combat. Luckily they don’t disappoint and the assembled cast, most of whom are real life fighters, prove they are still more than capable of kicking it with the best of them. CG effects are also utilised in parts, particularly for the finale, but this is really only to add to the fantasy element rather than take anything away from the action itself. My only minor disappointment is Stephen Chow himself, who has spent so long waiting to do a kung fu movie but winds up looking somewhat subdued during his shot in the spotlight.

While many may compare it to ‘Shaolin Soccer’, ‘Kung Fu Hustle’ is really an entirely different animal that is equally outstanding in its own way.  It is a brilliantly constructed spoof of the martial arts genre that includes all of the elements that made Chow such a success. From the king of Canto-comedy to an accomplished filmmaker, is there really no end to his talents?