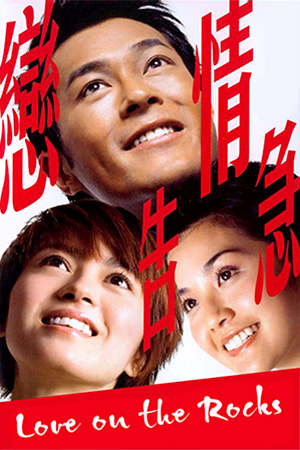 The cast and crew of ‘Love On The Rocks’ provided me with the necessary inspiration to purchase another romantic comedy. Dante Lam presided behind the lens, a director who seemed to peak with the smart, off-kilter ‘Jiang Hu -The Triad Zone’, but had descended into films that, while displaying potential, had never made the most of his promise. Then there was the prospect of seeing which Gigi Leung I would have the pleasure of watching: the delightful actress who had impressed in ‘Turn Left, Turn Right’ or the moping, prima-donna of the less than charming ‘Driving Miss Wealthy’. Finally there’s the usual endurance test commonly known as Charlene Choi – while I’ve nothing against ‘Twins’ and was impressed by Choi in ‘Funeral March’ and ‘Just One Look’, she is all-too-commonly portrayed as an infuriatingly immature ‘heroine’.

During a disastrous Valentine’s Day, stingy Romeo Ming (Koo) is told that there is no future in his relationship with Annie (Leung). After enduring Ming’s refusal to buy her flowers, insistence on eating as part of an ‘Eat As Much As You Can’ dinner and then allowing his grotesque friend to join them, Annie decides to end their awkward ‘romance’ and re-evaluate her life. Annie’s father steps into the dispute and tells them to put their relationship on hold for a few weeks so that both can take a long hard look at themselves, a move that both parties agree to. Ming, as unyielding as ever, cannot understand the expiration of his relationship and seeks the advice of self-styled internet love guru ‘Crystal’ (Choi). On meeting Crystal, Ming is encouraged to examine his past loves and his own bizarre foibles in an effort to pin-point why the woman he loves has left. Though he is initially baffled by his inexperienced 19 year old ‘advisor’, he begins to confide in her and, as a result, confronts his failings.

In answer to the opening paragraph, ‘Love On The Rocks’ has more than enough reasons to be genuinely appealing. It would appear that every film industry, from Hong Kong to Hollywood and every in between, has the uncanny knack of churning out romantic comedies with little interest in quality or originality. As a genre, it sometimes seems to be the laziest and the staple of the cynical money-making machines the world over. However, there are films that manage to work within this framework and still deliver a modicum of unaffected emotion. ‘Love On The Rocks’ doesn’t herald a revolution within the genre, but has moments that are truly heartening.

In a partial return to form, Dante Lam crafts a witty and, at times, touching love story that recalls ‘High Fidelity’ for part of its inspiration while also remaining true to the Hong Kong style that permeates it. Lam’s quirky camera angles and well-staged moments of humour mean that there’s more to enjoy than in the average rom-com. Lam doesn’t do quite enough to fully convince that he is on the ascendancy as there are moments of pure cliché that prevent this. The inclusion of Charlene Choi who is only slightly less annoying than usual (due to her reasonably brief appearance here) still manages to exasperate with her capricious ‘charm’ and serves as a blockade to the strong central love story. Her eventual devotion to Ming is an after-thought and stirs up little sympathy. Nevertheless, Lam injects enough verve into the film for it to be considered a moderate success.

Louis Koo and Gigi Leung have been on-screen partners a few times in the past and always spark a certain something in each other. This is no exception as once again there is a earnest feeling between the two that makes them a perfect couple on screen. Leung opens her big, expression-filled eyes and elicits more empathy than you might expect while Koo is particularly impressive as Ming. His character is a bit more nuanced than usual; he isn’t the charming, urbane hero for once – he’s a miserly, yet caring character with enough depth to make him interesting throughout. As his character is the fulcrum of the production, it needs to be intriguing enough to sustain the viewer’s interest and thankfully it does. Filling in the gaps is a pleasant cameo by Donnie Yen who gets to sink his teeth into a romantic role while also engaging in some amusing action with Koo.

‘Love On The Rocks’ has an intrusive piano score tinkling in the background coupled with the prevalent Canto-pop ballads that the genre demands. Such sounds are a reminder that this isn’t a masterpiece nor does it seek to stretch the genre. However, Lam puts a tried-and-tested couple together on the screen, fills the narrative with sweet and humorous asides and ends on an emotionally stirring reconciliation scene. Despite Charlene Choi’s intrusions and a few typically broad moments, ‘Love On The Rocks’ has a lot more going for it than many of its contemporaries.