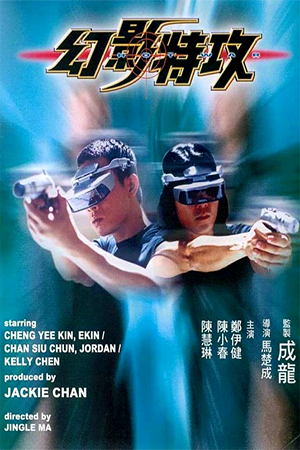 Jackie Chan produced this impressive action film with science fiction overtones and once again Ekin Cheng and Jordan Chan are teamed together.

International terrorist Alien takes a sinister interest in the scientific development of subliminal encoding. Mastery of these mind-altering waves could mean unlimited power over the masses through television transmissions, naturally allowing domination and immense wealth for the owner. To this end, Alien kidnaps some of the world’s top scientific minds to help him achieve his aim. Tango (Cheng), C.S. (Jordan Chan) and Blue (Kelly Chen) are three scientists developing the Project VR Fighter – a military programme that can turn an ordinary man into a top combat agent in a matter of weeks. Alien uses C.S.’s wedding as the perfect opportunity to kidnap Blue for his research, but he also kills his bride-to-be, shattering his life. The C.I.A are unwilling to send a force to find Blue and so her two friends decide to utilise the Project VR Fighter themselves. Now with exceptional abilities, Tango and C.S go to Hong Kong to rescue Blue and gain revenge against Alien. However, it gradually develops that others who went through the Project VR Fighter training are showing certain side effects…

‘Hot War’ was made before ‘The Matrix’ and it does seem that some of the ideas in this film have filtered into the Keanu Reeves blockbuster. The effects are not up to the standard of ‘The Matrix’, but they are still impressive and are coupled together with some fine action set-pieces. Ekin Cheng gives another pleasantly understated performance while newcomer Kelly Chen is much more than just decoration. Jordan Chan is given the most tortured of all the lead roles, but it is a role that he pulls off with aplomb. Although this didn’t set the Hong Kong box office alight, it is still recommended viewing.