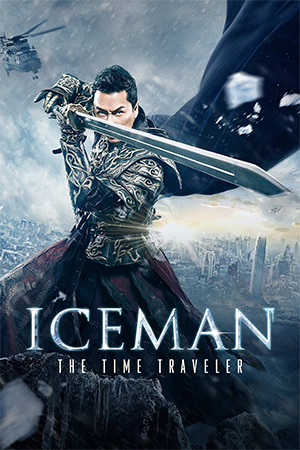 This belated follow up to Yen’s first ‘Iceman’ is, much like that first film, a muddled and mostly action free disappointment. Just as confusing and nonsensical as the first film, ‘The Time Traveller’ sees Yen’s thawed out ancient warrior now travelling back in time to stop his former comrades (Wang Baoqiang, Yu Kang and Simon Yam) from colluding with an evil Japanese warlord (Kurata) and massacring his hometown. Along for the ride is his new modern day squeeze May (Huang Shengyi) who for reasons so inexplicable decides to go time-hopping with Yen. Inexplicable is a good way to describe this confusing and mainly pointless sequel as proceedings rarely make sense and what should have been a fun (and action packed) concept is all but wasted with confusing editing, dull drama and lashings of CGI “spectacle”.

The opening ten minutes or so is just a lengthy re-cap of the first film and once the narrative does kick in, it rockets though character motivation (bad guys become good guys just to become bad guys again 5 minutes later!) and no sooner have we started than we’re propelled back in time with Yen having to defend his old village and fulfil his destiny! Or something! There is some attempt to flesh out the relationship between Yen, Wang, Yu and Yam but it does little to clear up the narrative confusion, muddles their intentions further and Yen just ends up fighting the evil warlord Yasuaki Kurata (‘Fist of Legend’) come the end anyway. While the first ‘Iceman’ had a couple of decent fight scenes this sequel doesn’t even really have that. There’s a bit of cool swordplay come the home stretch as Yen and Kurata hop through time periods duelling, which is pretty cool but, unfortunately, is coated in too much so-so CGI and, like the rest of the film, just too rushed.

Mercifully this film seems to have jettisoned the crass poop-based humour of the first instalment (no thwarted by excrement here!) and once the film hops back to the period setting it’s at least a little engaging to begin with. Alas, too much stale drama, confusing plot progressions (Wang’s character is now a good guy again!!) and just an overbearing sense of “what the” all clog up proceedings. What could have been a fun period set actioner is instead a rushed, confusing sequel which, as other reviews have pointed out, seems to have been cobbled together in a rush from unused footage from the first ‘Iceman’.