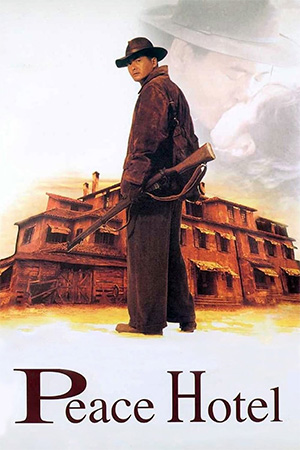 Lesser known Chow Yun-Fat and John Woo collaboration made after the epic euphoria of ‘Hard Boiled’ and before Yun-Fat jetted off to Hollywood, ‘Peace Hotel’ is an interesting curio that never lives up to its killer concept. Yun-Fat is a reformed killer known only as, err, The Killer who runs a hotel for refugees fleeing lives of crime. A haven protected by The Killer’s notorious status, the Peace Hotel soon comes under siege when a fleeing woman (Yip) seeks refuge from an in-pursuit gang, whose leader she killed. At first respecting the rule that no crime or killing can take place within the hotel’s grounds, the gang soon threaten to storm the compound if The Killer does not release the woman to them.

A great set up (a remote hotel, protecting those on the run, under siege from an out-for-revenge gang) is unfortunately wasted (well, certainly diluted) via odd creative choices, too much focus on comedy-romance (therefore jettisoning any tension!) and a reliance on grating theatrics. Cecilia Yip, while committing full force (and being put through the ringer!) is unfortunately laboured with an unlikable character and the blossoming romance her and Yun-Fat doesn’t convince and clogs up way too much of the proceedings. Likewise, Yun-Fat, despite being as cool as ever, is lumped with the played-out-killer-who-used-to-kill-but-doesn’t-want-to-anymore-scenario, even though we all know he will take up arms once again. However, he takes an age to be (fully) pushed and when the action blowout comes it doesn’t feel as cathartic as it should.

The hotel is stuffed to the gills with a variety of oddball characters who all look to The Killer as their leader but are given short shrift in favour of the Yun-Fat and Yip romance angle, and Yip being given free rein to mug up the screen constantly! No problem if the film was a straight up comedy-romance but despite these aspects, it’s played too straight thus never finding an entertaining balance between the silly and serious. The Western aspect is certainly welcome and well realised, and the film looks amazing thanks to Wong Wing-Hang’s (‘The Barefoot Kid’, ‘Hard Boiled’) lush cinematography. There’s a flurry of action towards the end that while decent is either all over too quickly or rendered incomprehensible due to rapid fire editing.

Co-writer/director (and long-time Johnnie To collaborator) Wai Ka-Fai certainly crafts a good-looking film and those looking for something a little quirkier/off the beaten track will get more out of it. But with a hotel for criminal refugees, run by Chow Yun-Fat, with a Chinese-Western vibe, ‘Peace Hotel’ should have been a lot more fun and action packed.