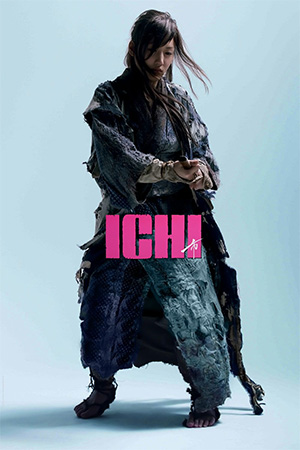 The story of a wandering blind samurai called Zatoichi is a well known tale that has been made into film form many times, perhaps most memorably with Takeshi Kitano’s 2003 version. Fumihiko Sori’s film puts a female twist on the familiar story with the blind samurai now being a young woman searching the lands for the man who taught her to fight with a sword. Despite the often predictable nature of the film, ‘Ichi’ is a vibrant, exciting take on the samurai legend with an outstanding performance from the leading lady.

Ichi (Haruka Ayase) is a blind samurai searching the land for the man she thinks may be her father. Her exceptional fighting skills keep her safe and help protect her from a group of bandits who mean to do her harm. During the scuffle, a man comes to her aid, another wandering warrior by the name of Toma (Takeo Osawa) who due to a childhood accident has been unable to draw his blade in battle. He befriends Ichi and promises to keep her safe, despite her impressive combat skills already doing so. The two then find themselves aiding a local clan, the Shirakawa, in protecting their village from a group of marauding bandits. Their relationship and fighting skills are pushed to the limits as the two must discover the courage within themselves to overcome their weaknesses and defeat the enemy.

Avoiding the often melodramatic nature of many other samurai films, adding a few modern touches and staging some impressive action, ‘Ichi’ is an invigorating samurai flick. Sori, the director of cult hit ‘Ping Pong’ and stunning animation ‘Vexille’, crafts a good looking film that doesn’t skimp on the human emotion or action. An often told tale it may be, ‘Ichi’ still feels fresh thanks to excellent performances, eye catching production design and some often touching moments in among all the slicing and dicing. Leading lady Haruka Ayase (‘Cyborg Girl’) gives an impressive performance and despite her small frame and good looks, convinces as the sword wielding heroine. Her Ichi is a fragile soul, still coming to terms with the way her life has turned out but a force of nature when she is called into combat to strike down those who will do her harm. Likewise, Takeo Osawa (Sky High) is excellent as the similarly damaged soul, Toma, providing a few lighter moments but never being relegated to the comedy sidekick. The relationship he has with Ichi is affectionately developed and often touching as they come to care for one another.

The colour scheme and setting are vivid in colour but never garish or overbearing. They give the film a heightened look rather than a gritty one but this never detracts from the story or drama. The film isn’t saturated with action but there is a good amount of sword wielding combat, wonderfully staged and shows that slow motion can be a bonus to an action scene rather than a hindrance. While the story may not be the most complicated or original it is the characters and the emotional journey’s they take that provide the backbone to ‘Ichi’. Sori may drag a few scenes out and some may be a little irritated that Ichi gets sidelined for a while in favour of Toma but this is actually a film about the two of them. Unpretentious, well crafted, a great central performance and some excellent action make ‘Ichi’ a hugely enjoyable experience and refreshing take on the samurai genre.