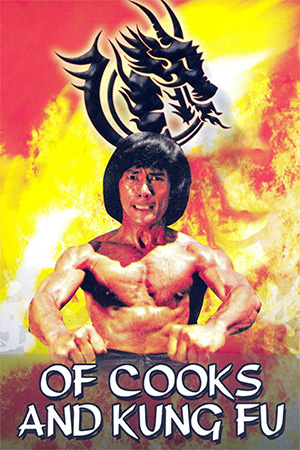 A former cook to the Empress who has long since taken to an isolated life teaches his lazy nephew the unusual style of ‘Cooking Kung-Fu’ – a form of martial arts that has as much variety as Chinese cuisine. Meanwhile a killer with a straw-hat is wiping out all of the other cooks who once worked in the palace kitchens though his motives remain mysterious. It isn’t long before the two forces are brought together as the answer to the villain’s background become clear.

The George Segal comedy thriller ‘Who is Killing the Top Chefs Of Europe’ is given an old school twist with low-budget independent flick ‘Of Cooks and Kung-Fu’. Ting Chung’s film opens with the bold claim that ‘Chinese food is known to be the best in the world…’ before introducing viewers to the decidedly odd style of Cooking Kung-Fu which is showcased by hero Jackie Chen training among an array of giant woks. Other than the style highlighted, ‘Of Cooks and Kung-Fu’ is fairly routine, swapping between the hero’s mishaps and the killer gradually working his way up the food chain.

That said, ‘Of Cooks and Kung Fu’ does feature some inventive action and a star in Jacky Chen who is adept at acrobatic fisticuffs. Most of the running time is Chen’s painful training routine, but near the end he gets the opportunity to test his skills against Chen Shan who brings a certain something to the mix as the killer with the hidden identity. It may not quite show the fizz of many of the better indie films of the era, yet it is at least fair to middling.

On a side point, during the last fifteen minutes of the print I watched, the dubbing changed to German – that certainly added novelty value.