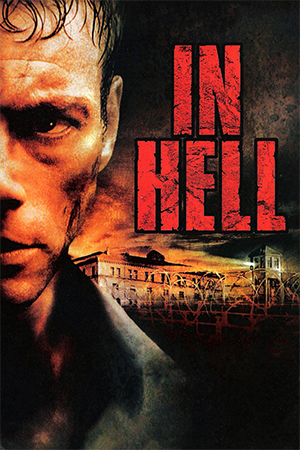 When it was released, ‘In Hell’ divided audiences right down the middle. Hardcore Van Damme fans were outraged that it was another step away from his larger-than-life action films, while more casual viewers felt it was a refreshingly dramatic change of pace.  For me though, a self-confessed Van Damme fan, it lies somewhere in between the two.

Kyle LeBlanc (Van Damme) is just your everyday guy; he works hard during the day and goes home to his loving wife at night.  That is until one horrific night when a man breaks into his house and murders his wife.  Luckily, LeBlanc is able to chase the man down and the case is taken to court.  As it turns out though, the murderer is part of a rich family and he is set free so LeBlanc takes the law into his own hands and shoots the man dead on the courtroom steps.  LeBlanc is then sentenced to life imprisonment in a Russian jail that is ruled by the mafia from the inside and littered with corrupt and excessively violent guards.  The new inmates soon learn the ropes and realise the only way to survive is to use their fists in organised fights to entertain the governor.  As LeBlanc finds himself getting dragged deeper and deeper into the dark lifestyle, he realises it is time to take a stand and try to regain some of his self-respect and attempt to get himself out of this hell!

‘In Hell’ is certainly a very different vehicle for Van Damme. The film’s story focuses firmly on the more dramatic aspects and Van Damme is forced to ditch his invincible image in favour of a man driven purely by emotions. Surprisingly though, it actually proves to be a pretty effective transition and he delivers a subtle yet convincing performance. This is in part, down to Ringo Lam’s direction as he crafts out a very gritty and realistic tale that is not afraid to dip into the depths of the darkness. It has to be said that it’s a good combination and the style is much more suited to Van Damme than anything Tsui Hark had to offer.

In keeping with Van Damme’s restyling, the action for ‘In Hell’ is also far removed from what we are used to.  The brawls that are incorporated, of which there are quite a few towards the end, are much more akin to wrestling matches than anything martial arts related. Normally they consist of two hugely built competitors grappling in a no holds barred bout to the death.  Although this may not be as pretty to look at, it is definitely in keeping with the setting and it prevents the viewer from getting too distracted from the central premise.

Despite all the positives, there are still some fatal flaws that cannot slip by unmentioned.  The biggest issue I had was with the plot itself, as it’s hardly what you would call original. We’ve seen the story of a harshly treated criminal inside a corrupt prison a fair few times before, and there is little on offer here that deviates from this well-trodden path.  This also goes hand-in-hand with the rather tame dialogue, which is often so predictable that you could easily sleepwalk through the entire movie with the sound turned off.  Finally, you have a fairly mundane and clichéd set of secondary characters. The film is absolutely littered with shallow prison stereotypes and all this does is just make you think the writers couldn’t be bothered to fill in the blanks.

The Ringo Lam and Van Damme partnership is finally starting to come to fruition, as ‘In Hell’ is definitely a big step in the right direction. Van Damme puts in a very strong leading performance and Lam helps elevate some mediocre material to a much higher status. If you’re open to seeing something a little different from the muscles from Brussels, then ‘In Hell’ is certainly a welcome change.