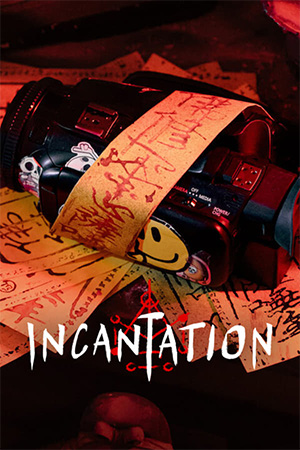 The found footage formula is taken to fresh and creative heights in this deeply unsettling Taiwanese horror. Six years ago, Ronan (Tsai Hsuan-Yen), along with two friends, broke a religious taboo as they were filming for their online ghost busting show. Subsequently cursed, Ronan is now recovering after spending some time in a mental institution and wants to reconnect with the daughter she was pregnant with at the time of filming the sacrilegious act. However, it seems the curse has not forgotten Ronan and now targets her young child, Dodo, meaning she must pay the consequences for her actions and fight the curse head on if she and her child are to have any semblance of a normal life.

Intertwining two timelines (the present day where Ronan documents her attempts to rid herself of the curse and the footage of what happened six years ago) ‘Incantation’ takes a little while to get used to as it flips back and forth between the two time periods but soon finds a satisfying and mostly coherent groove, to deliver a supremely spooky tale of occult haunting. Director and co-writer Kevin Ko stages an ambitious found footage experience (taking in many locations, characters, and timelines) that while occasionally buckling under its dedication to the found footage concept (despite valid reasoning for filming, the flick still can’t quite get away from the “why is this being filmed?” feeling and certain scenes seem to even abandon the found footage trope all together!) the film manages to use this style to its advantage. A palpable sense of all-consuming dread is maintained throughout the runtime and the makers never resort to jump scares just for the sake of them. While there are some jump scares and several gory scenes, they are built up to via the narrative and the escalating hopelessness of the situation and therefore have a better pay off.

Hopelessness is a good way of summing up ‘Incantation’ as that’s the sense one gets as Ronan’s situation only seems to worsen for her and all those she meets. While the film is an effective scary and gory horror it also taps into the fear of there being forces out there we cannot control and the consequences that come with messing with beliefs and rituals that should be respected (whether you believe in them or not!). One can’t help but feel that Ronan and her colleagues deserve what they get with their disrespect for the old ways. However, it’s Ronan’s child who is the real victim here, unfairly targeted due to her mother’s actions, and this gives the film another layer of unease as a lot of the horror is being inflicted towards a child. In fact, this leads to the freshest aspect of the film as Ronan documenting her actions in present day is her way of involving us, the audience, in her plight as she encourages us to take part in the chant that is often shown on-screen: the idea that the more who share the curse the weaker the infliction on her child becomes. It’s a clever approach that again gives way to a sense of unease and may make viewers so uncomfortable they will turn away from the screen during the climactic reveal that is supposed to break the curse on Dodo but thus curse us, the viewer, instead!

Hyperbole maybe, but a clever tactic to keep us engaged over the almost two-hour runtime and certainly builds the tension for the fright-filled finale. The fourth wall is even broken by Ronan (played with real gutso by the excellent Tsai Hsuan-Yen) and while director Ko may throw every trick in his bag at the screen, it certainly helps make this found footage flick stand out from the crowd. Treading similar territory to the likes of genre masterpieces ‘The Wailing’ and ‘The Medium’, ‘Incantation’ may not be as satisfying overall as those films but can certainly join their club in convincingly portraying the consequences of meddling and disrespecting the occult and its ancient traditions.