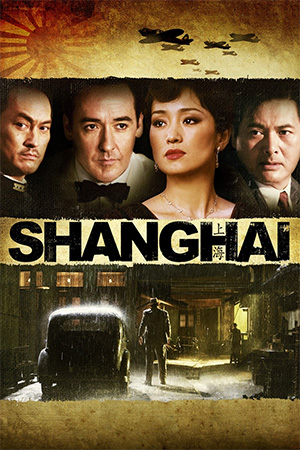 This unfairly overlooked throwback to 1940s film noir may hold few surprises but is nevertheless a solid and very well acted thriller that is worth a look. Paul Soames (Cusack) is a U.S Secret Agent who arrives in Japanese occupied Shanghai in the weeks leading up to the attack on Pearl Harbour. In town to investigate the death of his friend Connor (Jeffrey Dean Morgan), Soames becomes entangled with local mob boss Anthony Lan-Ting (Yun-Fat) and his sultry mysterious wife, Anna (Gong Li). As he gets drawn further into the world of Anthony, Anna and Shanghai he soon discovers Connor was into something much deeper than simply trying to get a local girl he was seeing (Kikuchi) a passport to freedom. A conspiracy that perhaps even involves his own government and one which could get him killed if he continues to dig deeper.

Fronted by an impressive international cast, ‘Shanghai’ is a good looking and often hard hitting East meets West thriller. Very much in the style of bygone film noir murder mysteries, Mikael Hafstrom ably pays homage to this genre without over egging the style or feel of these films. The slick productions values perfectly recreate early 40s Japanese occupied Shanghai without making the film feel like an over-stylized, in-your-face homage. In fact, proceedings are kept relatively subtle save for the sudden outbursts of quite shocking violence. Death is very much at play in this whodunit tale with various forceful gun battles adding a jolt to the more subtle and thoughtful aspects of the film. However, ‘Shanghai’ is very much about its characters, their relationships and how their lives all seem to be on a collision course that, for the most, part are brought to vivid life by a group of skilful actors.

John Cusack and Gong Li, in particular, make a strong impression as the leads that drive the story. Sharing a convincing chemistry that sparks on more than one occasion, they convince as the anti-hero would be detective investigating a murder and the femme fatale who causes him to become all a flutter. In fact, Gong Li is especially excellent here, her character effortlessly switching from tough to fragile to sexy with ease and skill. While she is always lovely to look at, Li brings a certain bite to her character and shows that Western produced films are just as good a showcase for her acting talents as Eastern ones. Special mention should also go to Ken Watanabe as a conflicted and damaged Japanese intelligence officer who also makes a powerful impression despite only featuring in a handful of scenes.

On the downside, Yun-Fat is somewhat wasted in a role that requires him to do little more than look cool and flirt with the ladies (both of which he does impeccably well). He doesn’t get that much screen time but he seems to be having fun playing a ruthless gang boss. Proceedings do lag here and there, the tension not always maintained and the guessing-game-narrative doesn’t really hold too many surprises. However, the effective acting, production design and tight direction manage to keep the film entertaining and in some instances rather tense.

Overall an effective noir thriller, ‘Shanghai’ is an entertaining watch buoyed by an impressive cast which features several Eastern superstars showing they can hold their own against some of Hollywood’s finest.