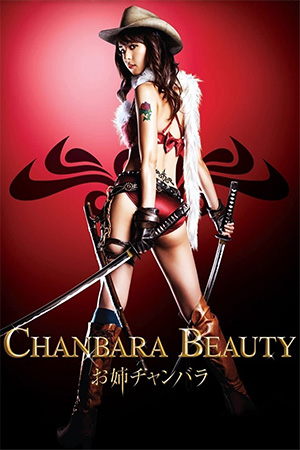 An evil doctor, who works for an evil corporation, has created some kind of evil virus and infected everyone with it. Thus Japan (and possibly the world) is now populated with the undead. However, this being a zombie flick, there is a rag tag bunch of non-dead making their way across the land, fighting off hordes of mutant dead people, so the main characters can find the remaining (hopefully) alive members of their family. And kill the evil doctor. Or something. What’s definitely happens is: there is a sexy bikini wearing samurai cowgirl who hacks up a lot of zombies. If that is your thing, then, well, cool.

While it offers nothing new to the zombie and action genres or low budget Japanese cinema (except maybe a sexy bikini wearing samurai cowgirl), ‘Chanbara Beauty’ is mindless action stuffed junk that packs in the odd bit of creativity here and there. Director Yohei Fukada (cinematographer on Japanese sick flick, ‘Grotesque’) is obviously trying to make his own fun zombie/horror/action flick a la Raimi, Jackson or even Kitamura and while his film works with its own simple, silly premise and sexy leading lady, it is nothing genre fans haven’t seen a million times before.  The sense of fun a flick like this needs never ignites enough and when it does gets extinguished in favour of making things go serious all of a sudden. Not something that really works when the main premise is a sexy bikini wearing samurai cowgirl fighting zombies. I mean, how do you make that dull?

The crappy CGI in the action scenes actually mars the film rather than adds to the silly fun and there are a couple of unnecessary and distastefully misogynistic scenes, which again, ruin the fun. Still, it’s not all that bad and if you need another zombie slaying flick to sate your appetite, then ‘Chanbara Beauty’ will do. Despite the ropey CGI, action guy Go Ohara (‘Death Trance’) does stage some cool feats of combat not least an epic showdown between the sexy bikini wearing samurai cowgirl and a bunch of hooded zombies in an abandoned warehouse.

Not quite having the right sense of gleeful fun a flick like this needs or reaching the crazy, stylized and action heights of similar fare such as ‘Versus’ or ‘Machine Girl’, ‘Chanbara Beauty’ is an uncomplicated, intermittently fun, undead actioner that will please fans of the genre and the videogames.