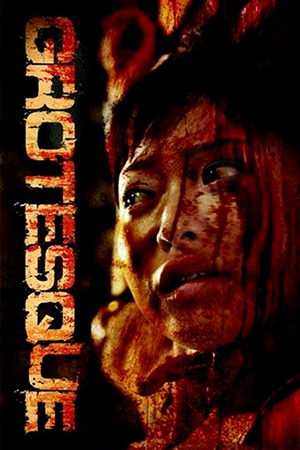 ‘Grotesque’ finally arrives amidst a swarm of controversy. Well, more precisely it doesn’t arrive, as the film has been outright banned by the BBFC. On the shores of the United Kingdom at least, ‘Grotesque’ has been refused a certificate of classification and thus stopped indefinitely from being released. Is this justified? Well, the right and wrong about censorship can be debated until the cows come home and there isn’t enough room in this review to discuss it. So, does ‘Grotesque’ then live up to its gruesome, gory reputation? As is often the case: no.

That may not be entirely true, as ‘Grotesque’ is still a nasty, little Japanese shocker that often leaves you wondering: what was the point of it all? But any film that arrives with the hype and banning that ‘Grotesque’ has had, disappointment that it doesn’t live up to all the attention is inevitable. Now it’s certainly not the most horrific film every made, but what counts as the “most horrific” depends on personal taste as one person’s “most horrific” could be another persons “that wasn’t that bad,” but the film still contains enough sleaziness, excessive violence and dubious intentions to warrant at least a minor disreputable standing. First off, what is ‘Grotesque’ all about? A crazy nut job kidnaps a young couple; humiliates them sexually; tortures them excessively; says he will then let them go; doesn’t, then tortures them some more. That’s not a brief overview, that is essentially the film. The purpose of the torturer’s motive? Well, the filmmaker would have us believe it has something to do with the guy being lonely; or that he only gets a thrill by humiliating his victims who, in turn, it would seem may enjoy some of their humiliation; or perhaps he is bringing two people closer together by turning them into mutilated freaks; or he is, in fact, just a crazy nut job. Well, he does listen to classical music as he rapes and disfigures his victims, so there is no doubt he is evil!

There is some pontificating about evil and society and love but ‘Grotesque’ is essentially one long torture set piece. But this is no shot on DV hack job. ‘Grotesque’ is actually nicely shot, well paced and above all, the acting is very good. The gore is strong stuff with some startling imagery of what happens to the victims and their eventual disfigurement. Yet, the gore, despite copious and rather convincing, probably isn’t the real reason why this film has been banned. Early on there is some startling sexual degradation, an uncomfortable scene, which no doubt the director intended to cause debate, push boundaries and make some point about human relationships, but will often have you sitting there wondering why you are watching a film such as this. Plus, alongside all the gore this makes ‘Grotesque’ very uncomfortable viewing.

It’s hard to tell whether the filmmaker was in fact trying to say something or just push the boundaries of cinema. If he was trying to make a point, he completely blows it with an over-the-top, almost cartoonish scene towards the end, destroying any realistic aim the film was trying for. ‘Grotesque’ certainly shouldn’t be compared to the likes of ‘Hostel’ (really, why is that film held as an indicator of top class gore filmmaking?) and the debate of whether it should be banned and if in fact it is any good will no doubt carry on for some time yet. I can’t really recommend it unless you have to see every example of extreme/trouble causing cinema and the one star is for the surprisingly good acting.