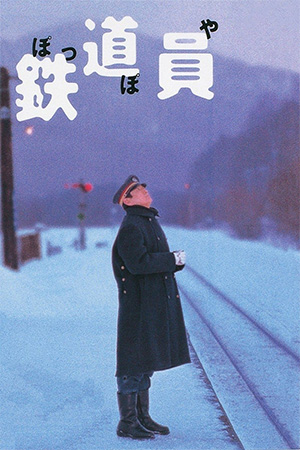 Yasuo Furuhata’s elegiac lament about one man’s sorrowful reflections on what might have been swept the awards at a variety of Asian film festivals. Among these were Japanese Academy awards for Best Picture, Best Director, Best Actor and Best Actress, a clear sign of the impression this thoughtful production made on audiences at the time. It’s always a challenge to review such lauded films and refrain from either being enveloped in the adulation or awkwardly contrary in opinion. Yet ‘Poppoya’ is the kind of mature work that leaves an impression irrespective of popularity.

Station master Oto (Takakura) is devoted to his lonely mountain post, so completely focused on the responsibilities of his role that he leads a hermit-like existence. When the dwindling popularity of the station means closure is just weeks away, Oto begins to reflect on his life and the sacrifices he has made for his beloved job. As he ponders the death of his baby daughter and wife he finds precious solace in the shape of a young schoolgirl who still uses the station and an ex-colleague whose life he saved. The impending closure approaches and Oto is left to contemplate which direction his life should take, but continues to rue the mistakes of his past.

The delicate, thoughtful pacing of ‘Poppoya’ is the perfect way of telling this story of bitter regret and retrospect. The near two-hour running time delicately glides along unrushed, giving an insight into the loneliness of its lead character. Asian cinema has often been so good at exploring themes of isolation and quiet despair with a gentle, unfettered manner of telling the story. Japanese cinema in particular can point to great masters of cinema like Ozu who proved how powerful a carefully developed atmosphere can be. ‘Poppoya’ isn’t ‘Tokyo Story’, but it still exerts its power of the viewer.

Some reviewers have attempted to critique ‘Poppoya’ as an ode to the fabled work ethic of Japanese society, a mindless polemic about the need to be hopelessly devoted to your role no matter what other external distractions there are. From the solemn opening frames of an inhospitable, yet enchanting Japanese landscape to the quiet turmoil Oto suffers throughout, such an accusation is completely unfounded and it stands as more of a plea to appreciate loved ones rather than anything more sinister. Oto’s life is certainly not to be envied nor his gradual descent into reclusion admired. Ken Takakura gives Oto that world-weariness and sense of futility that the character deserves and it is the skills of the veteran Japanese actor that gives Yasuo Furuhata’s work the emotional depth it needs. That furrowed brow and pensive look conveys as much tragedy as the well executed flashbacks to past sadness.

‘Poppoya’ is unlikely to be a film that many will feel passionately attracted to, but it succeeds because you feel drawn into the central dynamic and intrigued by what troubles the lead protagonist. Furuhata uses a subtle hand in revealing the deaths of those dear to Oto and even the twist that is reserved for the denouement. Such execution errs away from being too ponderous or self-conscious, making ‘Poppoya’ a dramatic work that comes recommended by this reviewer.