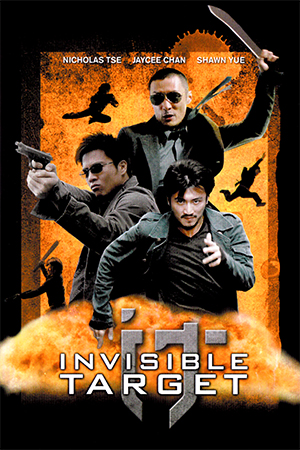 Nicholas Tse (‘Time & Tide’), Shawn Yue (‘Dragon Tiger Gate’) and Jaycee Chan (‘2Young’) are three cops brought together, for varying reasons, to take down a gang of criminals who are wrecking havoc across Hong Kong. The gang is led by Wu Jing (‘SPL’), an almost superhuman like villain who along with his gang (including Andy On from ‘New Police Story’) are out to assert themselves as a force to be reckoned with and retrieve some stolen money they believe is rightly theirs. However, they do not reckon on the tenacity of three young police officers who will do anything, no matter the cost or structural damage to the city, to put a stop to them. A game of cat and mouse ensues as the cops are pushed to their limit before and all out, explosive finale erupts in a police station. Let the chaos begin.

Clocking in at just over two hours, ‘Invisible Target’ crams a lot into its running time. Those looking for a realistic police procedural drama may want to look elsewhere (or re-watch the ‘Infernal Affairs’ flicks) but those who enjoy a cops and robbers drama with plenty of action will find a lot to like. Benny Chan, one of Hong Kong’s most reliable directors, has crafted another great action flick. It may not reach the classic status of previous hits such as ‘Big Bullet’, ‘Who Am I?’ and the more recent (and underrated) ‘New Police Story’ but he can add ‘Invisible Target’ as a major achievement to an already exceptional CV. For the most part the film manages a nice balance between drama and action. Most of the action in the first hour is short, sharp and sweet but always entertaining and crafted with considerable skill. A rooftop chase and restaurant fight are standouts, all of which lead to the lengthy action explosion of the last thirty minutes. Taking place in and outside of a police station the finale crams in fights, gunfire, body burns, high-falls and many explosions with giddy glee. This is what Hong Kong used to do best: sustained action finales that would leave the viewer in awe with the amount of action and dangerous stunts on display. It’s good to see ‘Invisible Target’ getting back to that tradition.

Drama and acting wise the film mostly succeeds. Benny Chan has a tendency to slip into melodrama and ‘Invisible Target’ is no different. A little too much philosophizing on what it is to be a cop or a criminal doesn’t deter from the good acting on display and the solid scenes of drama. Tse and Yue are both good as the brooding, ass kicking cops but are perhaps given too little to do other than, well, brood and kick ass. If the film belongs to anybody, it’s two people: Wu Jing and Jaycee Chan. Looking at Chan first (the son of the legendary, Jackie) he gives a great performance as the inexperienced, very put upon cop. Some have criticized that he doesn’t get to cut loose and kick ass like the rest of them (and thus not living up to the standard his father set). Yet, they are missing the point. His character is an inexperienced cop and is put through the ringer, emotionally and physically, during the course of the film and Chan plays it to the tilt. His character is not supposed to be like the ones his father played and it’s unfair to compare. It’s a brave role to take on and Chan performs it ably and should be applauded for taking on the role that isn’t your typical hero. This brings us to Wu Jing. Once again, much like he did in ‘SPL’, he steals the film from everyone else around him. Intense, charismatic and able to kick ass like the best of them, Jing once again proves the rule that villains are often more interesting than the heroes. Getting to strut his stuff in a number of fight sequences, Jing builds on the menace he displayed in ‘SPL’, creating another memorable villain who kicks the living hell out of the film’s heroes in the final showdown.

Overall, ‘Invisible Target’ is great entertainment. Another solid film from director Benny Chan, a young cast who show they can run with the best of them, and some glass shattering action that shows Hong Kong has still got it when it comes to the pyrotechnics. Highly recommended.