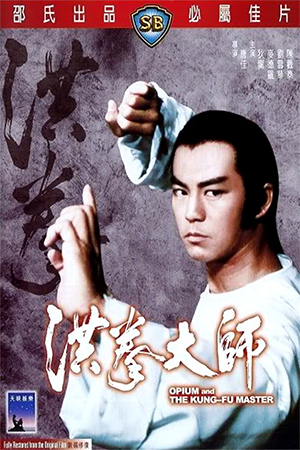 Ti Lung stars in this cool Shaw Brothers production that actually has a serious message to go along with all the high kicking kung fu and comedy hi-jinks that were synonymous with old school kung fu flicks. Lung plays Tieh, a top fighter, who along with his devoted students protects a small town from any trouble (such as some naughty thieves who are caught stealing in the film’s impressive opening fight scene!). Trouble comes in the form of a rival gang and their opium dealing kung fu master. Said dealer plans to turn the town into an opium haven but Tieh has others plans: plans that involve kicking the dealer’s ass and running him out of town. However, Tieh is afflicted by his own burgeoning opium addiction, which causes him to lose the fight and flea in shame. Can he kick the habit and kick the opium out of his town or is he already too far down the path of addiction?

‘Opium and the Kung Fu Master’ is a classy production all round. From the impressive production values, to the solid direction, to the fantastic fight action this old school fight flick is a gem. Directed by renowned fight choreographer Tong Gaai (‘One Armed Swordsman’), ‘Opium and the Kung Fu Master’ starts out light and frothy with some comedy hi-jinks and several of the supporting characters taking up the slack of the narrative before things take a turn for the dark as Tieh realises he is not quite the invincible fighter he thought he was and that his “casual” opium use is fast becoming an addiction. This is a brave choice (particularly for the time this film was produced) for the narrative to take. While the film is always entertaining and full of fight action, there is a darker element at play and the makers do tackle Tieh’s addiction head on (complete with a going cold turkey scene!). This may not be the most hard hitting drug story but the hero’s vulnerability caused by his addiction gives the film a tougher edge than is seen in most old school kung fu flicks. It’s also refreshing to see a hero who is damaged and susceptible to hurt and failure.

It’s not all drug despair as ‘Opium and the Kung Fu Master’ still provides the lover of old school marital arts with plenty of fight action: and some stellar fight action it is. Tong Gaai was known for his use of elaborate weapons in his fights scenes and while there is nothing too over-the-top here, weapons do feature heavily in the big fights. The opening fight, which takes place on some rooftops, features a nifty sword on a chain; fighting staffs are put to good use, especially by Lung in the epic final duel; and the film’s stand out set-piece sees Lung going up against his adversary with nothing but his hands to block his opponent’s double bladed staffs. This fight is incredible stuff, crisply choreographed, hard hitting and builds and maintains tension throughout.

‘Opium and the Kung Fu Master’ is top-notch old school action but it can’t quite get away from some things that used to mar such films. The comedy can be hit and miss, the drama (certainly in earlier parts of the film) is often ramped up to melodramatic levels (which means lots and lots of shouting) and on occasion it is just a little un-PC (the most notable example being a character actually named Fat Girl!). However, these are minor niggles for what is an excellent fight film and a perfect example of why old school still rocks.