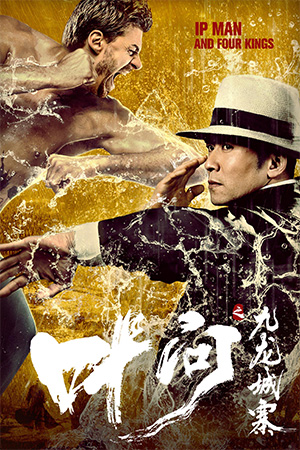 With ‘Ip Man: Finale’ due next year, the gravy train for films about the Chinese hero is coming to its final station. While the Wong Fei Hung craze of the early 90s had the full backing of Hong Kong cinema in all its pomp, the Ip Man fever has been a solid fixture in Chinese film-making over the past decade. ‘Ip Man And Four Kings’ is a lesser effort, akin to the independent productions that started to dribble out at the end of the Wong Fei Hung years.

Despite constant challenges, Ip Man remains the foremost teacher in the city and forges friendships and alliances with fellow chiefs. The stability is threatened by the opening of a new school which is being backed by a local kingpin and his foreign backers. Desperate to continue their slavery ring unabated, the criminals frame Ip Man for murder and wait for him to rot in prison. Yet, even when this fails, the esteemed martial artist has a few surprises waiting for him until he can clear his name.

Though it might not have the biggest budget to play with, this Ip Man film has a slick and stylish look that is hard to ignore. It’s a reminder that film has never been better to look at nor has it ever been easier to create an appealing period atmosphere. Unfortunately, though aesthetically pleasing, ‘Ip Man And Four Kings’ also shows the other side of the clamour for the superficial, the focus on artifice rather than the more difficult art of telling a story. At just 71 minutes long, ‘Ip Man And Four Kings’ is barely even a feature film though despite its running time it still manages to drag in places. There is nothing wrong with a simple storyline, but you at least expect it to have some flesh on its bones; ‘Ip Man And Four Kings’ leaves gaping holes in an already threadbare plot while taking even the simplest of character development as an ordeal.

The biggest thing that works against this addition to the genre is the action though. The days of long takes where skilled fighters performed intricately choreographed sequences has gone, replaced with one-punch, quick cut editing that obfuscates anything halfway decent. It’s a style that looks polished and cinematic, but is merely a shiny veneer to covering the lack of skill on offer. The slight bright spot is the brief scene between Ip Man and the acrobatic henchman at the end, but it comes too late to save the film. This is some way removed from the original Ip Man that understood how style and substance was important not just for the narrative, but also for the all important fisticuffs.

We’ve reached the same saturation point for Ip Man films that the Wong Fei Hung sub-genre encountered in the mid-90s; quality content was disappearing and the beloved character became nothing more than a cash-grab for lesser film-makers. ‘Ip Man: Finale’ needs to be the last outing for the hero for a while before much less accomplished works like ‘Ip Man And Four Kings’ are all that represent the genre.