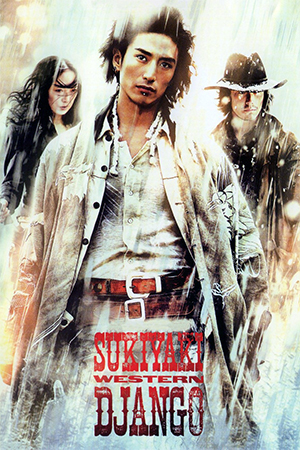 Two clans, Genji, the white clan led by Yoshitsune, and Heike, the red clan led by Kiyomori, battle for a legendary treasure hidden in a desolate mountain town. One day a lone gunman drifts into town. After a demonstration of his shooting skills the two clans try to buy his services, but the gunman has his own agenda. This is the ‘Spaghetti Western’ done Miike style.

As film titles go, ‘Sukiyaki Western Django’ is pretty informative as to what the film is all about. ‘Django’ refers to the 1966 Italian made western starring Franco Nero. SWD doesn’t necessarily copy the story but rather features elements of the Corbucci directed cult classic, such as the coffin containing a gattling gun. ‘Sukiyaki’ is Japanese dish of beef (or tofu) combined with a host of other ingredients and cooked in a single pot. Possibly a reference to the mix of genres and styles in the film. ‘Sukiyaki Western’ is clearly a nod to the Spaghetti Westerns which were ‘American’ stories made by Italian film makers. Spaghetti for Italy, Sukiyaki for Japan.

Miike has taken elements of the chanbara and elements of the western, dropped them in a big pot and stirred them into the hybrid we have here. The character’s costumes are part samurai, part cowboy and part ‘Mad Max’ all with a modern twist, and they look great. The gangs and their leaders are named after, and based on, real life Japanese clans and generals from the 12th century, but here they’re speaking in English and using “Old West” slang. The decision to have the a non-English speaking Japanese cast perform their lines in English is a strange choice. It can be slightly difficult to understand what is being said when it’s squeezed out phonetically by someone who doesn’t speak the language, but with the subtitles on, it’s not a problem.

The odd sounding English is just another element that helps create a world which is familiar yet original. One of Miike’s strengths is his ability to construct a world within his films that you can’t find anywhere else and that you don’t want to leave. In many ways this film reminds me of another recent Miike effort ‘Crows Zero’. Both films have a real energy and force about them, both feature a lot of violence and both have moments of excellent black humour. It’s not surprising that Quentin Tarantino is such a big fan of Miike, as currently he’s one of the most entertaining and unique movie makers on the planet.