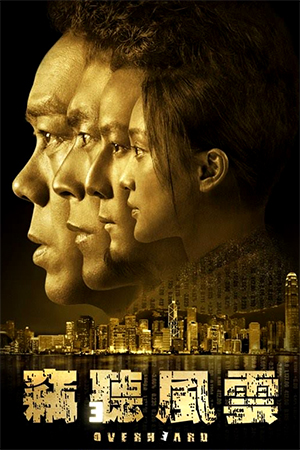 With the British government looking to develop land in the New Territories in the 1970s, locals were given land rights in exchange for their agreement. As years have passed and the land itself has risen exponentially in price, the area is now highly coveted real estate and with news that a Mainland billionaire wants to develop luxury apartments its value becomes priceless. The Luk brothers, eager to get the full share of the bounty, manoeuvres itself to take control of the company that owns the land, an association that once represented the common man who dwelt there. Their tactics become more desperate as news of the luxury development breaks and villagers rightfully feel cheated.

Meanwhile, recently released Jau (Koo) who had served time for the murder of an opponent of the group years before, slots back into his role within the Luk family. Unbeknownst to the other members of the family though, Jau is working alongside a surveillance expert (Wu) who has been commissioned with bringing down the crime organisation.

The cinematic axiom of diminishing returns is in full effect with ‘Overheard 3’, the massively disappointing conclusion to the popular series of thrillers directed by Alan Mak and Felix Chong. Each of the three films to have used the ‘Overheard’ title focus on a different storyline with different characters, but all are bound together by the presence of Lau Ching Wan, Louis Koo and Daniel Wu and a premise regarding covert surveillance. ‘Overheard 3’ is the weakest of the trilogy by some distance.

The original ‘Overheard’ was a cracking thriller that ended in such a way that a followup was surely impossible. Nevertheless that old Hong Kong cinema trope of the ‘in-name-only’ sequel was utilised and ‘Overheard 2’ was released, did very well at the box-office and naturally spawned this final instalment. Yet while the first sequel, though inferior, had an involving storyline and was interesting enough on its merits to work. ‘Overheard 3’ is a damp squib of a conclusion where the skill of crafting a snappy thriller as the first one was changes into an exercise in needlessly inflating the running time as if doing so makes this ‘epic’. The original packed in more excitement, character development and general quality in 99 minutes than part three could achieve if it went on until the end of time. As it is it drags itself along for 2 hours and ten minutes.

Much of the problem here is that the plot is woefully uninvolving. Wordy, but with nothing to say, this is a verbose movie populated by monumentally dull characters and bland ‘twists’ that fail to hold the attention. Of course the cast is exceptional and the production values are noticeably cranked up, yet this proves to be nothing more than a glossy veneer that tries to hide the deficiencies of the film. These past few years have seen Hong Kong provide Asian cinema with some of its very best thrillers; ‘Beast Stalker’, ‘That Demon Within’, ‘Life Without Principle’ and of course the first ‘Overheard’ film have shown just how good they can be. Unfortunately this is a pedestrian effort when considered as a stand alone feature –  when linked to its predecessors, it is even more of a let down.