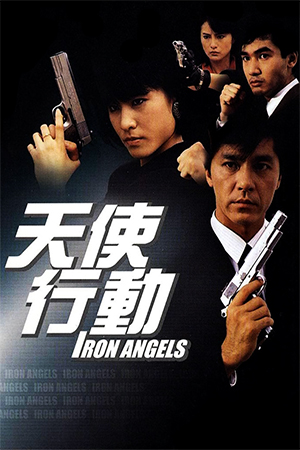 While ‘Iron Angels’ may not be the best Hong Kong action film from the city’s movie heyday, it’s certainly a benchmark in the battling babes genre. Moon Lee, Elaine Lui and Yukari Oshima dive in with nerve jangling aplomb in the action arena, throwing themselves into the fist fights, car chases and narrow escapes from explosions and show they are just as adept at taking a kick to the face or jumping from a high building as any bloke is. Hard hitting and often violent in nature, ‘Iron Angels’ features some truly awe inspiring stunt work that still makes the jaw drop twenty years on.

Lee and Lui are part of a co-ed Charlie’s Angels type super squad who re-unite to take down a drug smuggling operation. Said operation is run by the sadistic and completely bonkers Madame Su (Oshima) who turns to increasingly violent ways to stop the Angels from shutting down her drug ring. I say Iron Angels may not be the best, as apart from the incredible action and a mesmerizing performance from Oshima, it lacks a truly involving narrative. The action takes a while to get to and the film is not quite as packed with it as other reviews may lead you to think. Lee and Lui’s characters are so thinly developed with a good portion of the flick still given over to the male characters. This is supposed to be a girls with guns flick; we don’t need any blokes tagging along with them when we know they can handle themselves as well, if not better, than them.

That said, ‘Iron Angels’ still delivers and while the spy/’Charlie’s Angels’ element may not be as good as the action, the action more than makes up for it. Coming from the Golden Age of Hong Kong action cinema, the stunts and firepower are top notch. All done for real and often dangerously so, the action is tough, gritty and come the second half of the flick, unrelenting. Showstoppers include a fight in a high rise parking structure, an extended gun fight/attack on Madame Su’s house and the awesome three way finale battle between the female leads. Yet if there is a sole reason to see this flick, it’s for Yukari Oshima. A stalwart of this genre, she is at once beautiful and deadly and obviously relishing the chance to play a deliciously evil character. She can also kick ass with the best of them.

Seek it out and marvel at the intense action and enjoy the madness Hong Kong flicks used to put their casts through. While not as accomplished as ‘Police Assassins’ or ‘Royal Warriors’, ‘Iron Angels’ is nonetheless an entertaining female led action film.