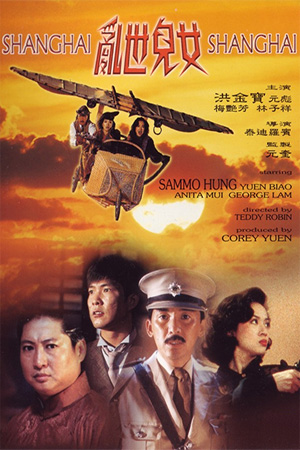 The ever charismatic Yuen Biao takes the lead role in this diverting, but unexceptional period action film. Biao plays a young man thrust into the danger and corruption of 1930’s Shanghai as he looks for his older brother who is a prominent policeman. Soon after finding his sibling, Biao becomes unwittingly embroiled in a local gang battle as he intervenes in a nightclub fire and befriends a travelling opera troupe. With these new found friends, Biao soon gets a reputation as someone whose fighting skills make him a tricky customer and he forms an uneasy alliance with Shanghai’s main crime head (Sammo). Conflict soon arrives though when Biao’s brother reveals his own plans to oppose the resident powers oppressing the people and wipe away the corruption from the city of Shanghai; this leads to an inevitable showdown between the honourable and the corrupt of the vibrant city.

For those looking for another ‘Pedicab Driver’, ‘Shanghai Shanghai’ will be a disappointment as the two films are quite a distance apart in terms of quality. The film could have done with the steady-handed direction of Sammo as Teddy Robin – who has undoubtedly shown some skill in features like ‘Three Against The World’ – fails to fully integrate the drama and the action of the film. The dramatic aspects are perhaps the weakest part of the film as the chemistry that should exist between George Lam and Anita Mui is not really evident and tends to derail the film’s pacing. Yuen Biao and especially Sammo Hung are underused and only really come into their element in the well-choreographed final fight that sees these two face up to one another; the film would have benefited from scenes like these rather than concentrate on the mundane. Criticisms aside, ‘Shanghai Shanghai’ features some splendid period settings and absorbing production design – fully evoking 1930’s Shanghai and the cosmopolitan nature of the city. The film also features an excellent dance-fight-interrogation scene between Yuen Biao and Anita Mui, a definite highlight that is another example of the invention of Hong Kong cinema.

If you’re a fan of Biao or Sammo, this will make an unremarkable, but enjoyable addition to your collection; if you’re indifferent to either, the chances are you will feel the same about this film.