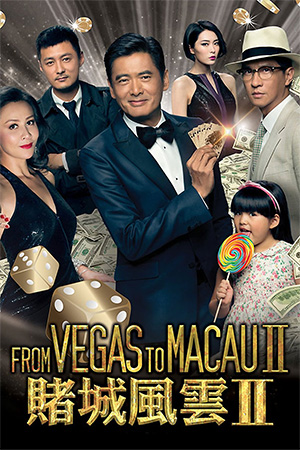 ‘From Vegas To Macau’ was one of 2014’s big hits both in Hong Kong and, more importantly these days, in mainland China. In one of the least surprising developments, director Wong Jing put the wheels in motion for a sequel almost as soon as the last one was still on the projector spools and got ‘From Vegas To Macau II’ to cinemas in time for this year’s Chinese New Year box office showdown; perhaps we should admire his indefitagable spirit. Then again, after sitting through the two hours that resulted from his efforts, this reviewer wished he hadn’t bothered.

‘Magic Hand’ Ken (Chow Yun-Fat) is living a luxurious life away from the stresses of the gambling world and the inevitable criminal elements it brings with it. His protege, Vincent (Yue), is working for Interpol in an attempt to bring down a criminal organisation called ‘D.O.A.’ though his request for his master’s help are flatly refused by Ken. It is only when Ken is involved in a shootout that endangers him and his friends that he reluctantly agrees to help Interpol and he and Vincent start by tracking down ex-‘D.O.A.’ accountant Mark (Cheung). Unfortunately Mark has embezzled 15 billion dollars from his former employers, bringing the full might of the criminal underworld against the ones who are trying to protect him.

Perhaps the music played during the opening and closing credits act as a suitable metaphor for ‘From Vegas To Macau II’ – the much loved ‘God of Gamblers’ theme is given a jingly jangly, yet completely hollow and unwelcome remix, much like the dreck sandwiched between their appearances. This is a 120 minute juggernaut of inane popularism, an attempt to distill any and all of what is big in pop culture into one venomous swill in the hope that its topicality makes it interesting. There are references to ‘The Walking Dead’, ‘Lost In Thailand’ (a good portion of the film is set there), ‘God of Gamblers’, ‘Iron Man’, ‘Transformers’, ‘K-Drama’, Daddy, Where Are We Going?’, Donnie Yen (Wong Jing has an absurd obsession with dropping the poor guy’s name into his recent work to make it ‘relevant’) etc. Yet the modest desire to make a ‘good’ film or even something comprehensible is treated with contempt.

Of course, Chow Yun-Fat is as watchable as ever and there was clearly money chucked at the screen – much the same way monkeys at the zoo throw their own steaming waste at passers-by. It is monumentally dull though, so much so that I actually WELCOMED the usual mind-numbing mahjong scenes, actually viewing them with an odd affection usually afforded to an eccentric uncle. The action sequences – which see goodly portions of Bangkok blown up – are tiresome (I suppose we are meant to find all these pretty girls and cascades of bullet casings falling on concrete floors enjoyable) and the comedy is just an acidic, vomit of loud, wildly unfunny discharge from the bowels of a farmyard animal.

And it seems to start relatively harmlessly with the goodwill from the not-too-bad original trickling into the sequel. Then, knowing that the audience just want to see shiny, impersonal, collages of feckless parodies, ‘From Vegas To Macau II’ slimes its way from mild mediocrity to head-swirling annoyance. Then, the coup de grace, after an hour or so of brainless mayhem, there is the absolute biggest insult of all: the insertion of ‘pathos’. Are we meant to care about these characters? Oh, I see, Nick Cheung is running around Bangkok with his dopey moppet whining, that’s why I should care. Well, call me a hard-hearted beast, but I was hoping with every fibre of my being that some kind of nuclear warhead would level the whole area and render everything as pointless as it actually was.

‘From Vegas To Macau II’ gets very mild commendation for a few nods to past glories and the occasional joke that doesn’t feel like waterboarding. Nevertheless, if films like ‘Raiders of the Lost Ark’ show how wonderful great popular cinema can be, this is the kind of cretinous bilge that shows how woefully low modern blockbusters can get.