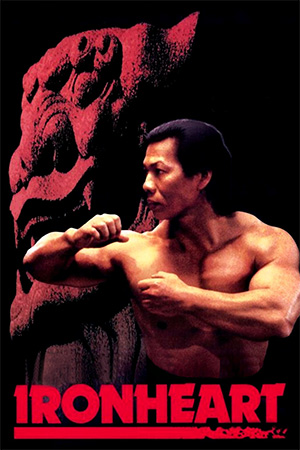 Ooooof, ‘Ironheart’ is a tough watch! Even for this low budget action movie aficionado who has no problem revelling in and enjoying the worst and most despised the genre has to offer. Not even 90s genre stalwarts Bolo Yeung and Richard Norton can save this, likewise director Robert Clouse who once directed one of the crowning jewels of martial arts cinema, ‘Enter the Dragon’. Pity this was also his swansong as a filmmaker. So what is so bad about ‘Ironheart’? Well, everything really but mainly its star and producer Britton Lee.

Fair play he wanted to jump on the 80s/90s craze of martial arts films, produce his own flick and show what a bad ass fighter he was. Great that he managed to get the likes of Clouse, Norton and Bolo on board and then frame the usual story of a rogue cop going after the killers of his partner. Standard set up, couple of name actors as the bad guys, some fights thrown in and hey presto, you’ve a got a flick this two bit reviewer would have rushed down to the video store to rent back in the day. So this typical slice of martial arts action should have been an entertaining no brainer as our shades wearing, Porsche driving, tough-as-nails kung fu cop goes about dishing out cold hard revenge. Alas, it was not to be!

Instead, Britton Lee’s charisma free performance all but drains the film of any life (he must utter all of 7 lines of dialogue in the whole film), the fights are distinctly lacking in energy, Norton is all but sidelined for most of the film (and doesn’t even get to fight!), Bolo does his menacing thing with aplomb but is also given far too little screen time (presumably he and Norton appeared as a favour to Clouse?!) and the pace is so disjointed and sluggish it appears the film has been heavily re-edited just to make it somewhat watchable. Instead we get endless scenes of 90s style night club dancing (which while good is no substitute for decent martial arts action!), an inane sub plot about a dancer joining forcing forces with Lee (for inexplicable reasons) just so he has a love interest and awkward scene after awkward scene of Lee trying to interact with anyone and everyone. Oooof!

Any redeeming values? Well, it’s suitably violent in a low rent exploitation kind of way, the song heard in many of the dancing scenes (‘If U Were Mine’ by The U-Krew) is certainly catchy and while they are wasted Richard Norton and Bolo Yeung do their best and come across as effectively slimy bad guys. Plus, if you are a connoisseur of bad movies you may be able to wring some low budget goofy fun out of it. But with the martial arts action severely lacking in excitement (and that’s what should save a trashy film like this) and a whole lot of WTF, means ‘Ironheart’ is just a load a B-movie badness.