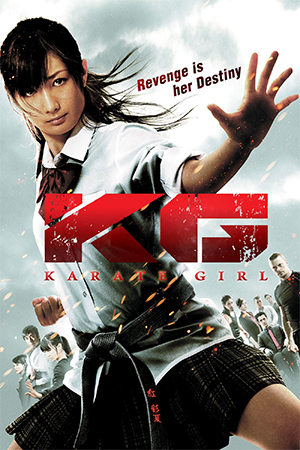 The Kurenai family practice a legendary form of karate, handed down through the generations and now passed from father to two young daughters. A rival school with criminal links wants to wipe out the Kurenai school and own a famous black belt that represents unrivalled authority in karate. In so doing, the aggressors kill the father, injure the eldest daughter and take away the youngest to be raised under their tutelage.

Years pass and that injured daughter, Ayaka (Takeda), is working at a local cinema. Though she keeps her karate mastery secret, she is forced to unleash it to stop a mugging happening, making her a heroine and putting her face in the national press. Her father’s killers are determined to wipe out every vestige of the Kurenai school and on seeing Ayaka’s appearance in the media, decide to send their best fighters to kill her. It isn’t long before the youngest of the Kurenai clan – unaware of her sister and her own past – is involved and the two sisters unknowingly step toe-to-toe for a showdown.

One of the defining images of recent action cinema was that of a schoolgirl unleashing an incredible kick to the forehead of a towering foe. It was used as a teaser trailer long before the film was released and created notable worldwide buzz. That moment was from the debut of karate prodigy Rina Takeda, ‘High-Kick Girl’. ‘Karate Girl’ is the appropriately-titled second release from Takeda, packed full of excuses for the cute kicker to show what she can do. Once again, the action department is well stocked. The story and character section, however, are much more sparingly supplied.

The fight scenes – and that is ultimately what a genre film is judged by – range from rewind-worthy brilliance (though, very helpfully, the director provides a slo-mo replay of the best moves) to repetitive slugfest. ‘High Kick Girl’ was a little too evenly balanced between these two, but the superior ‘Karate Girl’ has a far better ratio in favour of the former. Takeda is given some outrageous kicks to perform, a variety of unusual opponents to face (unlike ‘High Kick Girl’) and even a welcome smattering of nunchuka action in the grand finale. She performs these with the elegance of Margot Fonteyn yet barely conceals the sheer power underneath her grace.

While the divine Miss Takeda once again impresses, it is her young co-star Hina Tobimatsu who steals the show. Rarely has someone so young looked so utterly deadly in an action movie: when she takes on bruising men almost twice as big, she dispatches them ruthlessly. There may be a slew of films where pre-teens show martial arts aptitude, but Tobimatsu is in a category of her own. When Takeda and Tobimatsu fight back-to-back against the hordes, ‘Karate Girl’ is quite unforgettable.

As with ‘High Kick Girl’ though, ‘Karate Girl’s entertainment value has a sizeable caveat attached. While there is an abundance of neatly choreographed action, there is a vast black hole where a proper plot and believable characters should be. Rina Takeda can clearly handle more dramatic material, but her director anchors her to the absolute basics and surrounds her with cackling villainy that looked out of date thirty years ago. The main antagonist is another in a long line of wheelchair bound madmen who concoct devilish plans with pantomime relish, destroying any credibility the writers accidentally allow into the story. Perhaps Takeda’s next opponents should be those behind the cameras – one carefully placed kick from her might persuade them to give her a chance to be a three-dimensional person.

Rina Takeda has enormous potential. If she could be teamed with one of the great Hong Kong action helmers – a Sammo or a Yuen Kwai or a Yuen Woo Ping – the possibilities could be extraordinary. Unfortunately she is being paired with film-makers quite happy to use her as a freakish kicking exhibition rather than a charming young actress who can handle much more than just fisticuffs.