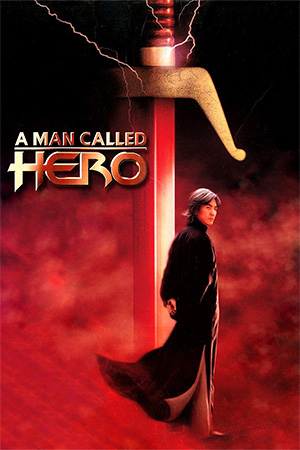 After ‘The Storm Riders’ proved to be such a huge success at the Hong Kong box office, director Andrew Lau decided to utilise another comic book as the source for his next movie.  As such, ‘A Man Called Hero’ was born and it promised to usher in a new generation of special effects laden kung fu movies.  Several stars jumped on board and the hype grew, creating good word of mouth before the film was even released and inevitably the takings were high.  Ultimately however, the film really only serves as another reminder of how comics are sometimes better left to artists rather than actors.

Hero (Ekin Cheng) is a young student of the martial arts who shows extreme promise under the watchful eye of his master until one day his family are brutally murdered.  He seeks justice in the form of trial by execution and, after seeking retribution, flees to America to leave his troubles behind him.  When his wife becomes pregnant she decides to follow him but only runs into dead ends.  She seeks out the assistance of the men who have encountered Hero along his travels and they slowly unravel the mystery of what has happened to her beloved.  When they are finally reunited it appears that things are not quite so fairytale after all as Hero is forced into a feud between his master and a Japanese rival.  With the pressure mounting up around him, Hero must fight for the honour of his kung fu style and hope that he can keep those close to him safe and sound.

It’s hard to write a review of ‘A Man Called Hero’ without echoing people’s opinions of ‘The Storm Riders’. Andrew Lau has a very obvious formula for making comic book adaptations and it’s one that is ultimately not very satisfying. Rather than focus on the standard hero vs. villain scenario, he draws from multiple sections of the source and litters the film with an abundance of minor characters and sub-plots. Unfortunately, all this does is confuse the viewer as there is no clear focal point to the film or a distinct hero to follow. It also jumps around between present day and flashbacks, meaning you struggle to focus on current events as you are too busy trying to figure out who or what you should be watching.  Of course, Lau soon realises that he doesn’t have 10 hours worth of running time to fill so as the film draws to a close he is forced to rush the conclusions. This means that most of the sub-plots are either poorly resolved or, more commonly, just left hanging in the air.

Lau’s character development (or lack of it) fairs equally poorly and the majority of the people involved in the story are never fully explored.  The central character of Hero is probably the worst offender, as we are confused about his motives right from the start and you are no better off when the film comes to a close.  There are a number of other characters included, some of whom are played by big name actors like Ken Lo, Yuen Biao and Anthony Wong. Sadly though, they really serve no purpose in the main story and the majority of them feel like extended cameos rather than people we can really care about. And that right there is the real heart of the problem; we just don’t care. Everyone is just another face in a crowd and no one is given sufficient screentime to allow the audience to become involved.

While there is plenty to criticise about ‘A Man Called Hero’, there is some entertainment to be found in the visuals. It’s fair to say that the special effects have definitely improved and people are no longer quite so blatantly pasted on a CG background. This really aids the film’s fight scenes, and they effectively mix together a decent amount of martial arts action with special effects.  The best example of this is the water battle between Anthony Wong and Francis Ng, which sees two combatants using the flow of the water as a weapon.  Similarly, the finale is also quite the spectacle as it takes place atop the Statue Of Liberty. Although not entirely convincing effects-wise, it is still a step in the right direction that proves that there are ways that these movies can work.

If only Lau had learnt from ‘The Storm Riders’ then maybe ‘A Man Called Hero’ could have been one of the greats. Sadly though, it winds up being more of a carbon copy that only shows minor improvement in the action scenes. However, they certainly aren’t worth the price of admission alone and you’ll probably be better off looking elsewhere for your big screen comic book fix.