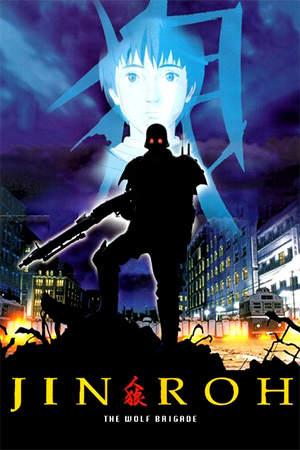 Highly lauded, and rightly so, grown up anime that almost manages to get the right balance of drama, fairy-tale styling and full on action. Flawlessly detailed animation helps to create a dark and oppressive Japan which has found itself in the grip of terrorist attacks and warring police factions. While pursuing a young terrorist into the sewers, Fuse, a member of an elite squad called The Wolf Brigade, corners the fleeing girl and despite having her in his sights, goes against his training and doesn’t shoot. The young terrorist girl then detonates the bomb she is carrying, killing herself instantly. Shaken by the incident, Fuse attempts to find out who the girl was and tries to figure out what made him hesitate. This leads him to the dead girl’s sister, who he strikes up a friendship with and the two soon find themselves drawn into political intrigue, corruption and double identities.

Complex and rich, ‘Jin-Roh’ is grown up animation in every sense and almost rivals the likes of ‘Akira’ and ‘Ghost in the Shell’ for ambition and animation. It takes its subject seriously, portraying a restless and alternate Japan thrust into chaos as its different classes of people and law upholders struggle for control. The film opens in grand fashion, mid riot, civilians and police locked in battle. Then the Wolf Brigade appear, a striking platoon of masked, heavily armoured and weaponed soldiers who show a no tolerance policy for obliterating those they consider the enemy. They create a startling image and bring a sense of dread whenever on screen, meaning ‘Jin-Roh’ is quite often a tense experience. In fact, the film has a fair share of startling imagery not least in its depictions of humans as wolves which leads to Fuse having some intense visions/dreams of wolves violently attacking people. While never exploitative, ‘Jin-Roh’ is an often dark and violent watch.

Unfortunately, despite all its technical brilliance and serious treatment of a grown up subject, the film can’t help but loose its grip on one two many occasions. The po-faced seriousness does tend to drag things on occasion and the Red Riding Hood imagery/metaphor that runs throughout the film is laid on way too thick. In fact, it is often thrust into our faces time and time again when there is no need for it. The story is perhaps dragged out ten minutes too long, meaning the film does suffer some pacing problems in the middle but thankfully gets back on track for a thoroughly blistering final act.

Despite its flaws, ‘Jin-Roh’ is still a rewarding experience. Don’t expect a constant, action packed thrill ride (though there are some incredible action scenes that pepper the narrative) but do expect an engrossing character piece that just unfortunately lays on some of its points a little too hard. Still, an often first rate anime.