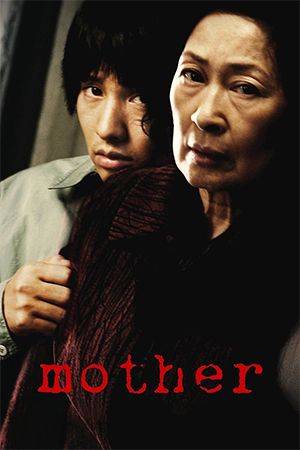 From the director of ‘Memories of Murder’ and ‘The Host’ comes a dark, unsettling and blackly comic drama about a mother who will do literally anything to protect her mentally disabled son and prove his innocence when he is charged with the murder of a local schoolgirl. On the surface a thriller about the search for a killer, ‘Mother’ is much more, non-surprisingly coming from Bong Joon-ho a filmmaker who likes to subvert genre’s so much one is not always not sure what kind of film they are watching.

’Memories of Murder’ and ‘The Host’ are, quite rightly, regarded as modern Korean classics and ‘Mother’, while not as fully satisfying as those films, can and will no doubt join their ranks. Subtle is certainly Bong Joon-ho’s approach here as ‘Mother’ is a quietly unsettling film about the possibility of evil or to do harm (even if it is to protect the ones we love) being present in all of us. There are no straight up good characters in Joon-ho’s film, everyone seemingly inept, bumbling, inefficient, mad or just down right evil in some way. The darkly bumbling comic tone (seen in Bong Joon-ho’s other films) is ever present throughout meaning we, the audience, come to like and even care about some of the characters no matter how inept or selfish they may appear. The subtly of the film lies in the slow burn reveal of what actually happened, tension often expertly mounted as the dark side of reality is revealed and a mother finds herself making questionable decisions in order to free her son from jail.

Yet the mother is just as flawed as any of the other characters and this is Joon-ho’s trump card: a character who may be just as flawed as any of the other horrible and useless people she encounters despite that, essentially, she is trying to do the right thing. Walking the emotional gauntlet is Kim Hye-ja as the mother who often saves the film from slipping into too much of a subtle approach. Her emotional investment in the character is astonishing and while we often question her actions and mental state we always feel sympathy for her as she is thrown into a world where nobody wants to help her or seems to care about her plight. An amazing performance and an incredible character.

Bong Joon-ho can’t help but slip just a little too much into the subtle approach and maybe lays on the quirky nature of some the characters and situations a little much also. Not that there is anything wrong with this approach but it seems to have become a trend for acclaimed modern filmmakers to perhaps rely on ambiguity, subtlety and subverting a genre too heavily that the emotional investment in the characters and constructing an engaging narrative can be somewhat lost. This may be seen as respected filmmaking but technique and style should never get in the way of telling a good story.

That said, ‘Mother’ is still a beautifully and intricately crafted film that is given an emotional heart thanks to Kim Hye-ja (who really should be given some kind of an award if she hasn’t already) and while it has lots more to say than just simply thrill, is still also an often gripping thriller.