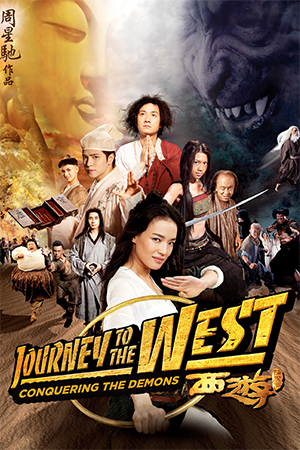 Even after all these years, Stephen Chow’s ‘A Chinese Odyssey’ movies still sit amongst my personal highlights of Hong Kong cinema. When I heard that Chow was planning to dip into the works of Wu Cheng’en for a second time, I have to admit that I was pretty damn excited. However, with Chow choosing to remain behind the lens and a heavy reliance on CG effects, was this a welcome return to the source material or one journey too far?

Chen Xuanzhang (Wen Zhang) is a trainee demon hunter who believes that he can purify evil by using kindness and love. However, his technique has never actually been proven and his belief in himself is shaken when he fails to defeat a demon fish. Luckily he is saved by another demon hunter called Duan (Shu Qi) who isn’t afraid to use violence to get the job done. Xuanzhang is determined to do things his own way though and he heads off to track down a demonic hog with the help of Duan, who has now fallen in love with Xuanzhang. Despite the help, the hog gets away so Xuanzhang and Duan enlist the help of Sun Wukong (Huang Bo), the infamous Monkey King who has been imprisoned for five centuries for his crimes in heaven.

Before I go any further, it’s important to note that the initial stumbling block with ‘Journey To The West: Conquering The Demons’ is that it doesn’t actually star Stephen Chow. This was certainly a huge disappointment for me personally, and I’d say it’s something you have to get over fairly quickly if you want to get anything out of this movie. Right, now that we’ve got that out of the way, the big question remaining is whether ‘Journey To The West’ is actually any good? In short, my answer would definitely have to be yes, but it might not be the movie you are expecting. My main reason for saying this is that it doesn’t exactly follow the standard Wu Cheng’en story. Instead, this is very much a Stephen Chow vehicle that is probably best described as a fantasy flick with a smattering of romance and action.

From the offset, it’s clear that the film is out to impress and it certainly looks fantastic. The opening sequence in particular sets the tone nicely, with a beautifully shot set piece that merges together live-action and CG to great effect. As I said before, the film chooses not to follow the standard tale of the Monkey King and instead only uses elements and characters from the source to forge its own path. Luckily this works out well and the film manages to craft out a refreshingly original story that makes great use of the fantastical setting and bizarre characters. The romantic subplot is equally well integrated, remaining a pivotal part of the movie without ever smothering the overall atmosphere. It also delivers a surprisingly moving conclusion that highlights how Asian cinema can differ so greatly from its Hollywood counterparts.

‘Journey To The West’ isn’t too shabby in the acting department either. While it would have been nice to see Chow himself in the lead, Wen Zhang fills his shoes adequately and sensibly veers away from the over-the-top silliness that he has occassionally been known for. Instead, he retains a very subdued presence that works perfectly for his character and makes him easy to warm to. Shu Qi is also on fine form and she fully embodies the lovable yet brash leading lady that Chow often seems to favour. Huang Bo is probably the standout performer here though, as he really gives the Monkey King an interesting slant and is extremely captivating whenever he is on screen. Long-time fans of Chow’s movies will also be pleased to see some familiar faces, such as Lee Sheung-Ching, Xing Yu and Steven Fung, all of whom are as reliable as ever.

In terms of action, ‘Journey To The West’ is probably going to disappoint those of you expecting a kung fu fest. The majority of what is on display is generally CGI enhanced and normally involves a number of bizarre and often comical powers. While these scenes never quite measure up to the likes of ‘Kung Fu Hustle’ or ‘Shaolin Soccer’, they definitely fit into this particular setting and give the film a very unique charm. This is particularly true for the finale as the three heroes all have very amusing and distinctive skills that will strike a chord with anyone familiar with the genre. Just make sure you go into the film with the mind-set that the action is very exaggerated and often played for laughs.

Having said all that, the film certainly isn’t perfect and it’s definitely a lot more hit and miss than some of Chow’s earlier works. While I do appreciate the ideas that he is trying to convey, the story really does flip flop between light and dark on a number of occasions. This is often somewhat distracting and occurs most notably in the finale as the movie dishes up some very brutal moments that are both bloody and somewhat depressing. It’s also fair to say there is quite a bit of religious symbolism that comes into play and although it didn’t bother me personally it is something that could easily put others off. Surprisingly, the humour is also somewhat patchy compared to Chow’s past outings. This is not to say that it is bad but I would struggle to pinpoint many moments that had me rolling on the floor.

Overall though, I’d still have to say that ‘Journey To The West: Conquering The Demons’ is a solid fantasy film that retains a fair amount of that Stephen Chow magic. Just don’t go in expecting the definitive ‘Journey To The West’ adaptation or a laugh-out-loud comedy, and then you’re likely to find it suitably entertaining.