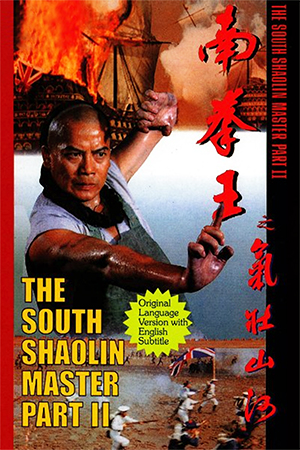 Yau Gin-Gwok returns for this slightly flawed but still entertaining sequel to the unsung Wu Shu classic ‘The South Shaolin Master’. Gin-Gwok plays the heroic character of Lin Hoi Nan, a Qing rebel and Ming loyalist who was a well known healer and defender of the poor.  Now the owner of a steelworks factory, he is living the quiet life and has become well respected by his junior brothers.

In the mid 19th century, China is starting to feel major pressure from the foreign invasion and suffering economically from the ban against opium smuggling and usage. As a result, political figures are desperately seeking help and strategies on how to defend themselves against the inevitable war.  Lin Hoi Nan, known for his heroic efforts, is hired by the Government to produce firearms and other weapons.

Unfortunately, corruption begins to spread and the few remaining loyal fighters and politcians are forced to flee the country. Nan and his colleagues also find themselves under attack and are eventually left with no choice but to leave the factory. However, this is not the end of it and assassins are sent after them to stamp out any possible resistance. It looks like upholding justice just got a hell of a lot tougher…

If you like Mainland Martial Arts movies such as ‘Shaolin Temple’ (the Jet Li version) or the original ‘South Shaolin Master’, then this is certainly the movie for you. The film boasts a solid plot and some fine acting, as well as being a great showcase for some superb Mainland fight choreography. Sadly, at the time it was made HK movie producers were no longer interested in the traditional MA flicks and had since moved onto other genres (such as buddy-cop flicks like ‘Tiger on the Beat’).

Yau Gin-Gwok, as we can see from this film and its predecessor, was an extremely talented performer and a very adept fighter. One of Gin-Gwok’s last roles was as a gang leader from Shao in the classic  ‘Once Upon a Time in China’. Unfortunately though, his talents were pretty much wasted there and he then chose to retire from the industry.

Overall then, ‘The South Shaolin Master Part II’ is a nice little film that most MA fans will surely enjoy. Perhaps not quite as good as the original but a worthy follow-up nonetheless.