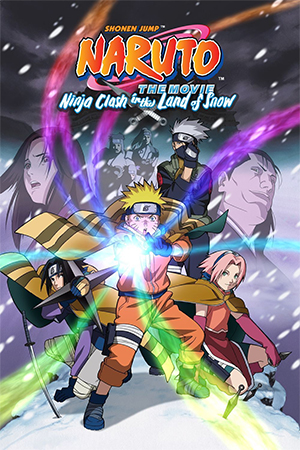 The last few months have been quite eventful for Team 7 (comprised of Naruto, Sasuke and Sakura), what with their successful completion of the Chuunin exam and the prevention of the attack on Konoha village.  Seeing as how that has all died down now though, it seems like the perfect time to resume their training and undertake some missions to gain valuable experience.  Their first new assignment is to escort a somewhat self-centred actress by the name of Fujimi Yuki who is travelling to the Snow County to shoot her new movie.  At first glance, this may seem like a relatively routine mission but when our heroes are ambushed by a group of Ninjas, things are about to get interesting.

Adapting a popular anime series into a feature length movie is always a risky venture, but it is one that has proved to be fairly successful in the past (see ‘Cowboy Bebop: The Movie’ or ‘One Piece: The Movie’). When it came to Naruto, I assumed that this would be a simple transition as the stories are generally told across several episodes and one of these would lend itself perfectly to a 90 minute movie.  Sadly though, rather than expand upon the entertaining adventures found within the series, this first film is something of a disappointment simply because it fails to capitalise on any of the already established parameters.  Instead, the writers have chosen to create a standalone quest that is packed full of filler and appears to be aimed at the casual viewer.  This approach severely harms any attempts at depth as our heroes gain very little from the experience and the concept of a film within a film removes a lot of the mysticism of Naruto’s world.  It’s also sad to see that the popular figures of Sasuke and Sakura are pushed into the background and their various traits and issues seem to have been all but forgotten.

In the action department, Naruto has always been top notch and if you’ve never seen it you really should check out the first 100 episodes of the anime. Unfortunately, the movie rarely rivals the series for thrills and there are only a couple of real fight scenes to speak of.  Although these aren’t too bad, it’s mainly Naruto that gets to let rip with his Ninjutsu so the Rasengen and Shadow Clone technique are recycled constantly.  As most fans will tell you, these are featured prominently in the series and it has to be said that they have been employed to much better effect when Naruto was still mastering the moves.  It’s also a real shame that a few of the more interesting characters are absent (such as Gaara or Rock Lee) as their presence would have really beefed up the action, especially when you consider that the enemy Ninjas here are devoid of special skills.

When it comes to the animation, ‘Naruto’ has always been a little hit and miss. The main reason for this is that the production is handled by multiple studios and episodes are often rushed to completion due to their regularity. This means that there are numerous inconsistencies and oddities that can look a little out of place, and this was never more evident than in the latter stages of the series.  Thankfully though, that isn’t an issue here and it’s clear that a lot of effort has been put into making the movie look as good as possible. All of the characters and backdrops are very clean and crisp, and the special techniques used during the fights have never looked better.

Naruto’s first cinematic outing does just about enough to pass the time, but it remains a far cry from the quality that we have come to expect from the series. All of the elements are dragged down to filler-esque levels, and it seems highly unlikely that the movie will satisfy existing fans or appeal to newcomers.