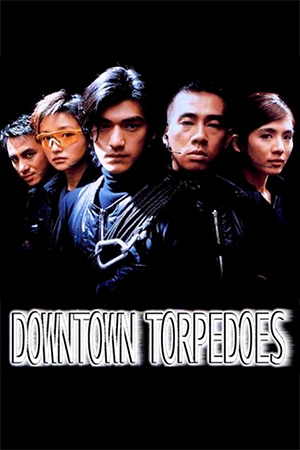 It’s been well reported that recent Hong Kong films have attempted to mimic Hollywood action flicks in terms of style and substance. Some have managed to absorb the best of Hollywood and Hong Kong by taking the best elements from either. Others have seemed like the mid-budget output that goes straight to video and has little to recommend it. Teddy Chen’s popular slice of espionage thrills, ‘Downtown Torpedoes’, stands as one of the first attempts to really capitalise on the aforementioned aims.

Jackal and Tango head a talented team of agents for hire; their missions are paid for by mysterious clients and usually include industrial espionage. The narrative opens with a prime example of their work and how, on their day, few can catch them. Their activities are quickly noticed by the various secret service agencies and one in particular, ‘G Team’, gives the band an interesting new assignment; steal a set of printing plates from a notoriously secure area and get them to the relevant authorities. The quintet are far from eager to oblige until they are blackmailed with the threat of loosing all of their assets and funds. Forced into this dangerous mission, the skilled operatives use all of their tricks to achieve their goals and then get the plates back to their rightful owner. The ease of the mission’s execution is soon explained when they are ruthlessly double-crossed by their employers and left with a member dead. Now the betrayed agents must unravel the real identity of their employers and who they really represent. However, recent events bring into the spotlight the real motives of each of the group and who can actually be trusted.

While not proving to be a significant mark in the pages of Hong Kong film history, ‘Downtown Torpedoes’ is still a pleasant diversion that achieves most of its goals. Taking its cue from ‘Mission: Impossible’, the movie features the expected amount of thrills alongside the obligatory double-crosses. To the definite credit of the production, there is a cast that will attract many ardent viewers and a director who knows how to get the most out of them. Jordan Chan always stands out in a film and here he happily plays the cocky sidekick to leading man Takeshi Kaneshiro. Though there is every reason to catch ‘Downtown Torpedoes’ there are unfortunately niggling faults which undo some of its entertainment value. The action is good, as has been said, but there are too many occasions where it flounders after a short time. Just as the viewer feels themselves drawn into the plot and now expecting a sizeable action set-piece, the good work fizzles out. It’s sad that while ‘Downtown Torpedoes’ impresses with its production values, it fails to deliver the quality that seemed imminent. The pace is mostly well-managed, but there are too many moments that stop it being a cinematic rollercoaster ride.

A strong three and a half star rating and a recommendation then, but should have been better.