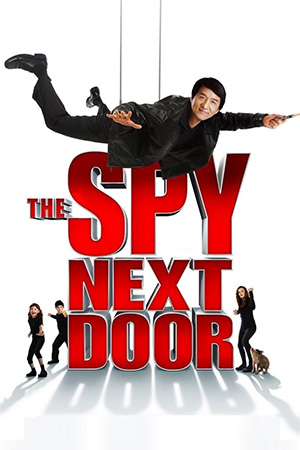 Bob Ho is a Chinese spy who has been working with the CIA to track down and capture a Russian terrorist by the name of Poldark. To help him blend in, Ho has been posing as a pen importer and has even started dating his neighbour Gillian, a single mother with 3 children. When Bob captures Poldark, he decides to retire from the spy game and tells Gillian that he wants to make a long-term commitment. Unfortunately though, she can’t be with a man unless her children accept him, and the three unruly terrors can’t warm to boring old Bob. When Gillian unexpectedly has to go out of town, Bob jumps at the chance to take care of the kids in an effort to gain their affection. However, when Poldark somehow escapes and decides to come looking for revenge, Bob’s babysitting job is about to become his toughest assignment yet.

If you’re a seasoned Jackie Chan fan expecting ‘The Spy Next Door’ to be another action packed outing, then you should probably switch off after you’ve seen the opening credit montage. Beyond this point, the film takes the ever-so-familiar format of turning an established action hero into a superhuman babysitter, and is therefore pretty much devoid of any kind of originality or genuine entertainment value. Chan is woefully miscast as the potential dad next door and even though he tries his best with the weak material, clearly struggles to inject any of his own personality into the role. Compared to the rest of the cast though, his performance is practically Shakespearean as Billy Ray Cyrus proves he is as bad at acting as he was at singing while Amber Valletta and the so-called ‘Russian’ bad guys are so awful that it hurts.

In terms of action, there really isn’t much in the traditional sense but it does dish up a couple of cartoonish fight scenes.  Unfortunately though, there is a huge reliance on wirework so even though most of the scenes are played for laughs, they end up being tediously stupid thanks to the awkward looking jumps and flips. Meanwhile, Chan’s trademark stuntwork is occasionally called upon, and there are one or two segments where he acrobatically moves around an enclosed space or scales a wall with uncanny ease. Admittedly these flashes of his talents are welcome, but they don’t really amount to more than a few minutes of the overall run time and are hardly enough to atone for the multitude of surrounding sins.

‘The Spy Next Door’ showcases very little of the Jackie Chan that we all know and love, and is really nothing more than the same old American kids’ movie being recycled for the umpteenth time (see ‘Kindergarten Cop’, ‘The Pacifier’, ‘Game Plan’, ‘The Tooth Fairy’ etc). I understand that Chan does these standard Hollywood vehicles to pick up an easy pay cheque, but it’s just a shame that they always have to be quite this dire.