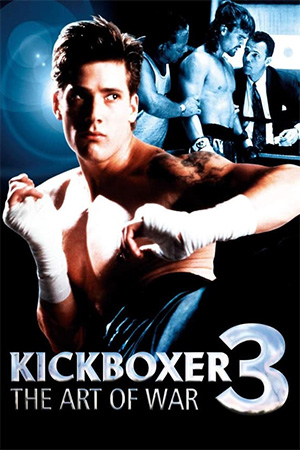 Having recently rediscovered his love for competing, David Sloane (Sasha Mitchell) and his trainer Xian (Dennis Chan) travel to Rio de Janeiro for a world kickboxing championship bout. Although Xian wants to spend the time training, David is keen to see the sights so the pair head out into the city. While they are eating lunch, David has a confrontation with a young thief but he sees the good in the boy and invites him to become his tour guide. Before that can happen though, David participates in an exhibition match with his upcoming opponent where he also meets manager Frank Lane (Richard Comar). As David begins to mingle in the same circles as Lane, his true colours start to show and a sinister underworld of sex trafficking is about to be unveiled…

After the disappointingly serious tone of ‘Kickboxer 2’, this third outing in the series opens much more promisingly. As we pick up the action, David and Xian have been relocated to the sunny streets of Brazil and there’s a cocky new fighter in town just itching for a beatdown. Unfortunately, it isn’t long before a child-in-need enters the picture and the film takes a sharp left turn into extremely predictable action B-movie territory. Gone are the old-school martial arts movie clichés and catchy Stan Bush tunes, and in their place we get a very generic tale of two seemingly superhero-esque good guys taking down a sex trafficker. While this is perhaps preferable to the sports theme pushed in the second movie, there’s something that feels inherently wrong about these two “nice guys” using automatic weapons to murder prospective bad guys at will. When the film does finally revert back to its fighting roots (mainly for the final third), we are fobbed off with a laughably weak plan from the main villain and a dull ringside conclusion.

Mitchell, who never really felt like the ideal choice for ‘Kickboxer 2’, doesn’t add anything new here to make you think differently. In fact, he now seems to have completely morphed into Cody (his character from ‘Step by Step’) and comes across as a slightly simple and gormless hero. This would perhaps be endearing if he weren’t also running around blasting people Dirty Harry style, as well as constantly being hyped up as the greatest kickboxer who ever lived. Meanwhile, Dennis Chan returns as the wise-cracking Xian and while his performance is still relatively solid, it’s hard to see what overall purpose he serves. Originally he was clearly intended to be the eccentric martial arts master but now he just seems to have abandoned his own life to become David’s emotional support. And when he too picks up a weapon, it feels like the principals he was originally teaching to Van Damme have completely evaporated.

The action in ‘Kickboxer 3’ is about the only area in which the film seems to have improved, although that’s not exactly a ringing endorsement. Either through a combination of Mitchell’s efforts or a superior choreographer, there’s a definite increase in variation to the combat and the fact that most of the fights take place outside the ring is a real plus. Of course, the little promise on offer is still hampered by quick cuts that frustratingly switch angles just as the moves are about to “connect”, but they do at least feel like fun low level fights. There’s also a fair bit of gunplay on show and, putting aside the gripes about it being included in the first place, they’re passably bloody and efficient. Sadly the finale is again a bit of a letdown as Martine, played effectively by Ian Jacklin, never seems like a significant threat and the fight is pretty much over before you know it.

If you’re looking for a low budget action movie with some explosions and cheap fist fights, ‘Kickboxer 3’ might just pass for some late night entertainment. As a sequel and an entry into the ‘Kickboxer’ franchise though, it feels about as pointless as the previous outing.