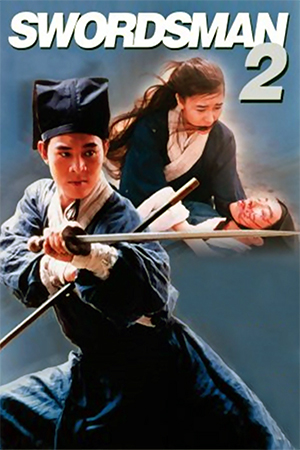 When ‘Swordsman’ proved to a surprise hit throughout global art-house cinemas, a sequel was quickly put into the initial planning stage. Remembering the all-too-obvious conflict in styles that was inherent in the first film – a result of multiple directors – Tsui Hark decided to take a back seat as producer and assign the task of helming the project to Ching Siu Tung. Such a partnership had worked so well in the 1987 masterpiece ‘A Chinese Ghost Story’ and its subsequent follow-ups that few had any doubts that something artistically grand could be the order of the day. It therefore came as little out of the ordinary when ‘Swordsman II’ opened to rave reviews and stunning box-office success throughout Asia. It remains a highly regarded film to this very day.

Following on soon after the conclusion of the original ‘Swordsman’, the film centres on the further adventures of Ling and his trusty sidekick Kiddo. Having been betrayed by the master of their clan, the duo choose to follow their own route in life and avoid the conflicts of the martial world. Before retreating to the solitude of Ox mountain and retiring from the life of a swordsman altogether, Ling decides to reacquaint himself with the beautiful Ming Ming – a member of the Sun Moon sect who saved his life in the previous escapade. On finding Ming Ming, the young hero discovers that all is not well in the sect and the despotic Asia has imprisoned their leader. Ling agrees to help the remaining Sun Moon members out and take on the supposedly invincible Asia. Little does he realise that his actions of bravery will not only put him into conflict with Asia, but will also suck him once more into the martial turmoil he had been keen to avoid. Added to this is the realisation that the freed leader of the Sun Moon sect is as megalomaniacal as his rivals and equally ruthless.

The decision to put Jet Li into the lead role – one of many cast changes – proves to be a canny one as the Mainland superstar rises to the challenge of his part. Although reliant on wires to an obvious degree (as is expected of the new-wave martial arts/fantasy film), director Ching Siu Tung gives his lead every opportunity to show off his immense prowess. Li is certainly a better martial artist than Samuel Hui in much the same way that Hui is the better actor, but here the choreography is well-developed to exploit these strengths. Dramatically Li also scores highly with his absorbing blend of charm and martial arts devotion. Aside from his merits though, this production is also blessed with a stellar cast of Hong Kong’s cream, most notably the ever-popular Brigitte Lin in the unusual role of Asia.

With a more comprehensible plot than its predecessor, this recommended fantasy flick makes the running time fly by. The viewer is treated to a visual feast that fully sketches out this almost mythical setting – kudos once more to director and cinematographer. Coupled with the superb design of the film is the exciting action that runs throughout and means that there is certainly never a dull moment. The combination of these aforementioned qualities means that this is a substantial piece of entertainment that lives up to its hefty reputation. The style may alienate some, but the substance is there for all to see. A further illustration of Hong Kong cinema’s unique ability to entertain and dazzle.