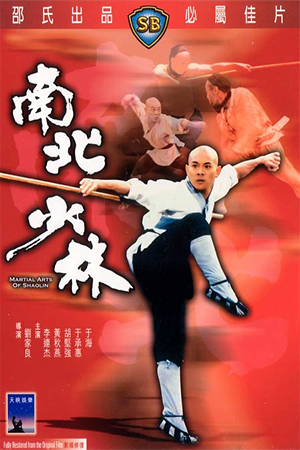 1981 saw the release of China’s first official foray into the traditional kung-fu film. With a respectable budget and a young Wu Shu champion in the lead role, ‘Shaolin Temple’ proved to be a massive hit and made a significant mark in a crowded genre. It also made a star of Jet Li – an action star who is now enjoying worldwide popularity. A sequel, ‘Kids From Shaolin’, followed shortly after and, although not living up to the original, it still boasted some impressive action and a cast growing in confidence. Then came the the final part of the trilogy (though none of the films are actually related plot-wise) and this time legendary director Liu Chia Liang took control of the production.

Although related in name and cast only, this third part features a storyline very similar to the original. A young Shaolin disciple, orphaned after his parents were killed by a despotic general, concentrates his time on developing his fighting abilities. During the course of time, the avenger sees his skills improve and he turns from a callow youth into a confident exponent. On one of his many excursions outside of the temple, he meets up with a band of rebels who share his hatred of the ruthless general. Together the group plan an assassination during an elaborate festival, but their attempt is unsuccessful and they are therefore forced to go on the run. The general is now aware of his determined enemies and increases the amount of protection around him. This not only makes the rebels’ task even more difficult, but it also means that it is only a matter of time before they are caught. Being forced into a corner means that the Shaolin fighter and his new friends must make their final move before they are apprehended. Gaining vital help from some Shaolin comrades as well, the heroes make one last attempt to get to the general before he wreaks even more havoc.

In some ways it could be argued that ‘Martial Arts Of Shaolin’ is a virtual remake of the original. The cast is nearly the same and the revenge-fuelled plot is carried out in much the same manner. However, there is a definite difference between the films though the are both excellent in their own right. The major alteration is director Liu Chia Liang’s inclusion of harder-edged kung-fu as opposed to the more acrobatic Wu Shu of the original. There is still countless opportunities to enjoy the performers demonstrating impressive physical feats, but Liang makes sure that it is not at the expense of traditional techniques. Jet Li excels in this third lead role with another flawless display of kung-fu alongside his dramatic abilities.

Although ‘Martial Arts Of Shaolin’ lacks the depth of some of Liu Chia Liang’s Shaw Brothers’ masterpieces, it does display his strong visual style. The relatively big budget is well exposed on the screen with luscious landscapes and vividly dressed extras the order of the day. This powerful cinematic look helps make this an epic kung-fu film the like of which was not often seen at this point. The final word then is this: a superior production that is satisfying in nearly every department.