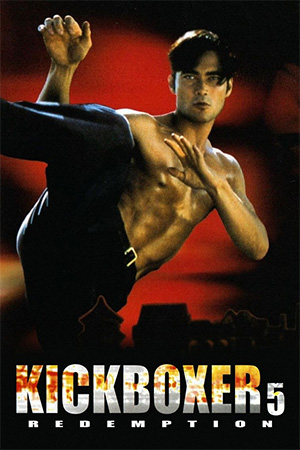 When David Sloan is found murdered, former kickboxer and close friend Matt Reeves (Dacascos) is shocked to learn of the loss. However, he is far too busy supporting one of his students in the US Kickboxing Championship title to really pay too much attention. Following an impressive comeback, the student snatches the victory and quickly finds himself being approached by a mysterious new kickboxing association. When he refuses to sign their contract, things start to go south and he is killed in the subsequent confrontation. Angry and driven by a desire for vengeance, Reeves finds himself travelling to the far reaches of South Africa in an effort to track down the man responsible.

After quickly dispatching of Sasha Mitchell’s character in an eerily familiar way, ‘Kickboxer 5’ wastes no time in handing over the reins to Mark Dacascos. And much like his predecessor, he plays a well-known fighter who just so happens to have chosen the path of a peaceful teacher. However, following the appearance of a sinister villain and the death of a friend, we soon find ourselves walking down the familiar path of a hero out for revenge. Admittedly none of it really feels like a ‘Kickboxer’ movie (then again, which of the sequels did?), but it all has a very easy buddy cop vibe that benefits greatly from the use of a few martial arts B-movie tropes. As for Dacascos, he definitely looks and feels like a much better fit for the series while James Ryan (‘Kill or Be Killed’) makes for an enjoyably evil antagonist.

What really sets this film apart from the other ‘Kickboxer’ films (original movie aside) is the inclusion of some far superior fight sequences. Dacascos has always been a very talented on-screen fighter and with him taking centre stage we get a much better overall picture. While you could easily nitpick that there isn’t a great deal of actual kickboxing, Dacascos’s acrobatic style is pushed to the forefront and this makes for several suitably exciting spectacles during the combat. The choreography is also pretty well handled for an American martial arts movie, with a nice variety of styles seen throughout and even a bit of weapon work thrown in for good measure. Sadly, much like a lot of these low budget efforts, the final fight does feel a little anticlimactic but it’s still nice to see the hero using a technique he has learned specifically to counter his opponent.

‘Kickboxer 5’ is far from perfect but it remains a solid action outing that is boosted by the inclusion of such a physically adept leading man. The ‘Kickboxer’ prefix is perhaps somewhat misleading simply because the film really has little in common with the other entries into the series, but as a standalone movie it definitely shines head and shoulders above any of the other sequels.