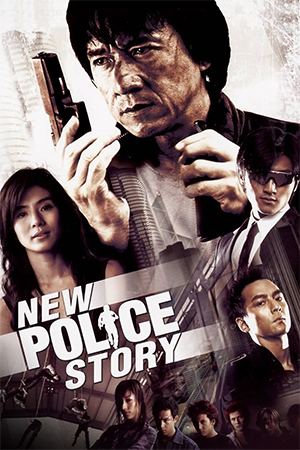 For Chan’s true fans, this has got to be one of his most eagerly awaited films since ‘Drunken Master 2’ a decade ago. Much has happened since then, including his disappointing outings in Hollywood, not to mention his clearly deteriorating physical condition (he is over 50 now!). As a result, I have learnt to reign in my expectations a little, as I know we will never see another film to rival the original ‘Police Story’ or the aforementioned ‘Drunken Master 2’. Consequently, I went into this film hoping, but not expecting, something to make up for recent disappointments. Thankfully, this is what I got.

Although this film has Police Story in the title, it is never meant to fit into the original saga’s timeline. It truly is a “New” Police Story in that it is a reinvention of the Hong Kong Cop Hero movie and not a remake or sequel. I am quite glad for this, as although I would dearly love to see the character of Chan Ka Kui return to the screen, I know deep down that nothing could live up to the original 2 movies so why set yourself up for a fall?

What we get instead is a modern day Hong Kong movie together with the bright OTT characters, short fight sequences and CGI aided special effects that are synonymous with the industry these days. Added to this is something that has been lacking from some of the bigger budget HK output recently – namely a bit of emotion.

Chan plays Inspector Wing, a senior officer in the HK Police, and is famous for his success. Unfortunately, a group of bank robbers bring his impressive track record to a spectacular end, culminating in the deaths of many fellow officers. As a result, Wing blames himself and turns to alcohol, pushing away all those close to him. Almost a year after this disaster, a police transferee, Frank (Nicholas Tse), arrives on the scene without warning and forces his way into Wing’s life, pushing him back into action to get those responsible.

It’s great to see Chan take on a serious role once again, and at times this movie reminded me of earlier classics ‘Crime Story’ and ‘Police Story 2’. Comedy moments are brief, but one in particular where Wing and Frank try to escape from the police station undetected had me laugh out loud. Otherwise, Chan plays it straight, and some of the scenes are genuinely emotional and raw.

In terms of action, there is not a great deal of hand-to-hand combat. What little on offer is neatly choreographed and expertly executed, as one would expect. There is some use of wires, but this is not a new thing, and contrary to popular belief Chan has used them for years to enhance kicks and impact reactions. Thankfully, there is little noticeable doubling proving that Jackie can indeed still bust a move. The rest of the action sequences are typical gunplay and pyrotechnic sequences, which cannot be avoided if you’re making a modern day actioner. All in all, the action is good, but if that’s all you want to watch the film for then you may end up disappointed.

The point of any review is essentially to let the reader know if a film is worth watching and if it would appeal to them. On these counts I would say that the film is undeniably well made and polished. The performances from all parties are excellent, and Jackie has reinstalled a little faith in me that he is still capable of making a good action movie. Therefore, I recommend to it to all of JC’s fans as well as those who like a well-made action film. To those who want to see another Police Story to rival the original, then I suggest you stop waiting, be realistic, and just enjoy the films he is making… like this one.