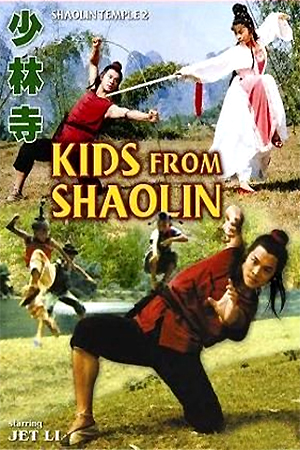 An energetic if sporadic martial arts romp, ‘Kids From Shaolin’ was only Jet Li’s second movie appearance. Equal parts goofy, exciting and tedious, the flick works best when Li and his band of pint sized pugilists are kicking butt and performing amazing feats of acrobatics. Li is the oldest son of a family full of boys who live on one side of a river in a remote part of China. Looked after by their adopted father, Li and his clan practice Shaolin Kung fu while on the opposite side of the river a family full of girls practice Wu Tang Sword. The boys vs. the girls as the opposing clans try to outmatch each other with their different styles but secretly they all want to hang out, get along and learn each other’s disciplines. So when Li cooks up some daft scheme for his dad to marry one of the girl clan, much tomfoolery, kung fu and outright barmi-ness ensue.

They sure don’t make them like this anymore. A kung fu comedy flick from a bygone era, ‘Kids From Shaolin’ is full of zany characters, dialogue and plot contrivances. While all the kids, who make up the two clans, are full of energy and human dynamos when it comes to all the flipping and kicking, their endless mugging does become tiresome. Nobody just speaks in this film, it’s all shouting, wailing and stretching comedy situations to breaking point. There are some laughs but if you are not accustomed to this kind of broad Chinese comedy, then you might find yourself asking what the hell is going on. Random plot divergences don’t help either, like the shift in tone when the father of the girl clan decides to drown his daughter for talking to Jet Li (but is still expected to love and respect him when she survives !!??). Or the “out-of-nowhere” subplot about some one eyed bandit who wants revenge on Li and his family, just so there can be a massive fight at the end.

However, if you can get past the crazy comedy and wobbly storytelling, ‘Kids From Shaolin’ is still reasonably enjoyable. The beautiful photography catches the lush countryside and mountain ranges of Mainland China, giving the film a unique setting. The film also provides novelty value in seeing Li at such a young age and so early on in his career. Obviously just going with the flow and having a blast at being in some movies, Li is all energetic innocence. He can also bust a move in the kung fu department. Li and the Shaolin kids get much opportunity to show off, the most memorable scene being a contest between the boys and girls where they fight each other using various animal styles of kung fu. There is also the epic twenty minute finale fight that features the entire cast getting in on the action in a free-for-all martial arts showdown. While the techniques, styles and acrobatics are impressive the fights do lack the intensity of other kung fu flicks. There is a lot of jumping about and rolling and while it’s good to look at, it often feels like everyone is just showing off. Still, there is great use of weapons, Li is as nimble as ever and if sword fighting is your thing, then check this one out.

Not the best the genre has to offer but entertaining nevertheless. ‘Kids From Shaolin’ represents where Li got his start and shows kung fu movies can have a lighter side. Plus a final twenty minute smackdown is always welcome and that is one thing kung fu movies have being doing well for some decades now.