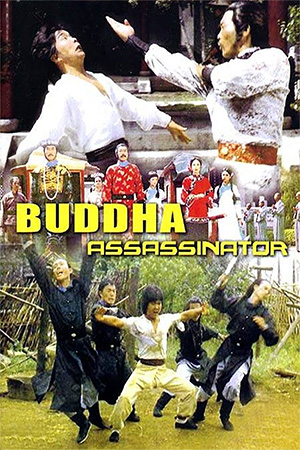 Mang Hoi will undoubtedly be familiar to many Hong Kong film fan as the short and boyish fall guy from such films as ‘Zu Warriors Of The Magic Mountain’ and ‘Yes Madam’. It is, however, easy to forget how acrobatic and how proficient he really is and it is only when looking back on some of his earlier leading roles that these things can be appreciated. ‘The Buddha Assassinator’ gives film fans a chance to see one such leading performance from Mang Hoi and finally get to see this perennial bit-part player step into the spotlight.

Hoi takes the part of Shao Hai – an eager kung-fu fanatic who spends his time developing his very raw skills and cleaning the local temple. Unfortunately for Shao even the local monks of the temple treat him with some disdain and constantly bully him as he goes about his work. Shao’s chance to be appreciated comes when he foils an assassination attempt on visiting Lord Tsoi and becomes a local hero, even to those who once ridiculed him. His bravery means that he is rewarded beyond his wildest dreams and showered with endless gifts by the affluent Lord Tsoi. As time goes by though, Shao begins to realise that Lord Tsoi is not as noble as he seems and is actually a corrupt Manchu lord intent on stopping rebellion. The seriousness of the situation becomes evident when Tsoi kills a Ming patriot who is actually Shao’s auntie and the young fighter vows revenge. As Tsoi is a kung-fu master whose skills are unparalleled, this wont be easy so the pint-sized patriot goes to his uncle – a crude, yet highly gifted beggar – to learn the Five Elemental Palm. After mastering this new style, Shao is now ready to face his awesome foe.

After ‘Hell’s Windstaff’ proved a critical and commercial success, this follow-up was quickly put into production with a similar cast and crew. Like its predecessor, ‘The Buddha Assassinator’ offers little new in terms of storyline or narrative twists. What it does offer though is some top-quality action from a very able set of actors and another classic stand-off between hero and villain. As the hero, Mang Hoi pulls off a series of impressive moves that would wow even the most jaded viewer. Hong Kong screen legend Hwang Jang Lee also relishes another meaty role as villain Lord Tsoi and he once again proves that, when it comes to cinematic kickers, few could ever match him. The bottom line of the film is simply this: average plot; good direction; sublime fight action; recommended film.