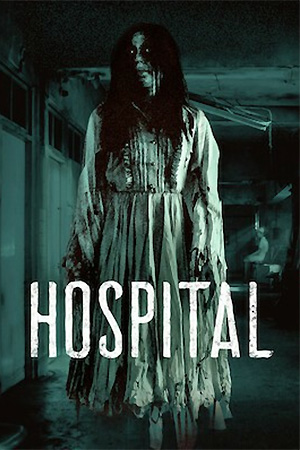 A pretty cool concept for this Taiwanese horror is all but wasted under a slew of clichés, incredibly muddled plotting, and not enough decent scares.

Said concept sees a Tao priest and his son agree to help two women contact their dead relatives in a now abandoned and reputedly haunted hospital. These would be ghost-botherer’s relatives died under mysterious circumstances leading to the closure and decay of the hospital, and the two women want to contact them to pass on messages they never got to when they were alive. However, when you mess with spirits in a decrepit hospital you should know it will not go smoothly and no sooner have the group made contact than they have unleashed a violent, vengeful demon out for blood.

A haunted hospital set-up, a group of ghosthunters looking to contact the dead, and the requisite jump scares are all good ingredients for a low budget ghost shocker like this, but unfortunately ‘Hospital’ flubs pretty much all of them. While the initial set-up and group are intriguing the plotting soon becomes overly muddled (relying far too much on lengthy flashbacks that deaden the tension), the group aren’t the most likeable (save for the priest’s son who didn’t even want to be there in the first place but does his best to try and save everyone!) meaning it’s hard to care about their reasons to be there and whether they will survive. Plus, the intriguing, haunted hospital setting is bathed in too much darkness making it hard to follow (the already convoluted) action.

Most disappointing (and imperative for a low budget ghost flick!) the scares fall flat due to some dubious editing and creative choices. Save for a couple of creepy parts and one cool scare right at the end, ‘Hospital’ doesn’t really deliver the chills the concept promises. The well-worn tropes are rolled out also making proceedings feel tired and worn: long-haired girl ghosts, people’s faces distorting in a demonic manner, a deadly possessed doll, and some feeble (save for that last one right at the end!) attempts at jump scares, all make appearances.

The cast try their best, there is some nice camerawork hidden under all the deep dark lightening and, again, the concept is rife for some fun spooky goings on but unfortunately ‘Hospital’ buries it under cliché, sub-standard scares, and a jumbled narrative. Shame.