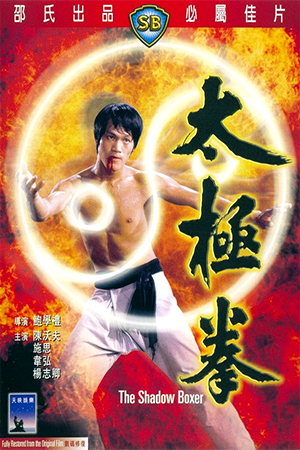 Chen Wo Fu was a real life Tai Chi champion. However, he would not see the opening of his first (and only) starring role in ‘The Shadow Boxer’ due to his untimely death as he tragically committed suicide by gas poisoning at the mere age of 24. Director Pao Hsueh Li was formerly a cinematographer and collaborator with Chang Cheh on films such as the classic ‘Boxer from Shantung’.

The powerful Jin family run a roadwork business but treat the workers badly. By provoking the workers, they would then refuse to pay them their hard earned wages should they make a stand against their unfair treatment. Because Ku Ding (Chen Wo Fu) is desperate for the money, he willingly takes a beating from his superiors. He is able to withstand this beating and only bears a few bruises afterwards as he is trained in the internal art of Tai Chi Chuan. While he’s not mistreating his workers, young Master Jin (Frankie Wei) likes to fight any worthy foes. After hearing that Ku Ding’s sifu Master Yeung (Yeung Chi Hing) is a respected Kung Fu practitioner, he challenges him to a duel. Much to his displeasure however, Master Yeung declines his invitation. Angered by his refusal, Jin has him disposed of.  Meanwhile Ku Ding’s girlfriend Ah Bao (Chan Mei Hua) is working for the lady at Jin’s place. Not content with mistreating his workers, fighting and having people killed, Jin rapes her. Unable to cope with the trauma she sequentially commits suicide by drowning herself. But strictly adhering to the teachings of his sifu, Ku Ding refuses to take action and finds himself on the end of more beatings. Only after getting drunk with a witness to the murder of his colleague Wu Lien Bing does he finally give in to his desire for vengeance with the help of Master Yeung’s daughter (Shih Szu).

‘The Shadow Boxer’ is in many ways similar to ‘The Big Boss’. However, there is a sense that Chen Wo Fu takes one too many beatings before he finally takes action. By the time he does, nearly everyone who means anything to him is already dead. ‘The Shadow Boxer’ does however raise an interesting concept of the horror Chen’s character experiences when he takes a life, a subject not usually explored in Kung Fu films of this time. It doesn’t dwell on it though, it merely raises the issue.

The real pulling power of this film though is the intriguing depiction of the rarely seen art of Tai Chi Chuan. Yuen Woo Ping brought Tai Chi to the screen in the classic ‘Tai Chi Master’. This was however a more stylised affair with extravagant wirework, although touching on many of the genuine principles of Tai Chi. Yuen Woo Ping also made ‘Drunken Tai Chi’ but other than the training sequences, there is little Tai Chi displayed in the film. The problem is the style itself as it is hard to make it look effective on screen due to it’s ‘soft’ appearance. Yuen Woo Ping found a way round this by incorporating the stylised wuxia approach to convey the internal energy concept. Although effective it isn’t realistic, but then it’s not meant to be. ‘The Shadow Boxer’ being made in 1974 is completely grounded and does as well as can be expected given the abstract nature of the style. In the early 70’s, choreography tended to look similar but then Tai Chi isn’t so much unique in the techniques it utilises, more in it’s application. The action sequences do however hold up well to other films made at the same time.

Chen Wo Fu, had he lived, could have probably gone on to be a major star for the Shaw Brothers. He certainly had the physical look, although his acting in ‘The Shadow Boxer’ is never more than adequate. Had Shih Szu had more screen time she probably would have run off with the film but then Chen was a martial artist and not an actor so who knows how his acting skills would have developed as he acquired more experience.

‘The Shadow Boxer’ is a fairly standard affair as offered by the Shaw Brother’s studio and is unable to elevate itself to compete with the likes of the classic ‘Boxer from Shantung’ and the exceptional ‘The Water Margin’, both made earlier. Although flawed, it still makes for good solid viewing.