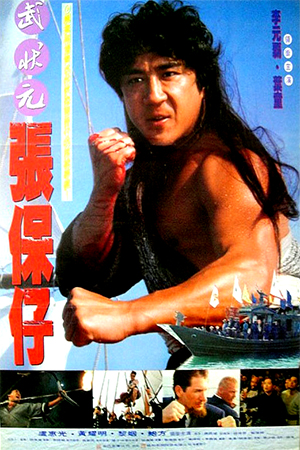 With the excellent ‘Ninja In The Dragon’s Den’ released by Hong Kong Legends and gaining deserved recognition once again, it’s interesting to cast a critical eye over one of Conan Lee’s slightly more recent efforts (though still seven years old). The first thing that really startles the viewer is the considerable girth that Conan Lee had accumulated since his ‘Tiger On The Beat’ days; it’s a shame that his athletic prowess had been slightly impeded by this. Nonetheless, this proves to be an enjoyable independent offering from the faded star and evidence that he can still pull off some fine moves.

In a time when the Chinese are oppressed by the terror of foreign powers, it takes a defiantly patriotic person to stand up to the tyranny. The call for such persons is answered by a loyal band of pirates who swear to protect their beloved China and fight back against the enemy. Two such pirates (Lee and Lo) team up with an official who is eager to resist the invaders and save the people. The alliance is strengthened as each mission is successfully completed, but one of the pirates begins to resent his friend’s increasing popularity. Things comes to a head when the jealous pirate leaves the clan and tries to find his own way in the world. It takes a severe test to give the loner a change of heart and the opportunity to battle against one major threat with his former brothers.

A formulaic plot that doesn’t exactly inspire viewing is lifted from tedium by some inventive and exciting action sequences. Ken Lo was fresh from his success in ‘Drunken Master 2’ and, although he doesn’t perform up that level, he shows off some powerful moves. Conan Lee is also on good form here and though he doesn’t hit anything like the heights of ‘Ninja In The Dragon’s Den’, he proves to be a solid hero for the storyline. The usual stereotypes of the foreigners and the strangely peaceful pirates ensue, but ‘King Of The Sea’ is worth finding for the fight scenes. Not one of the stand-out films of the 90s new-wave kung-fu boom, but there are certainly worse available.