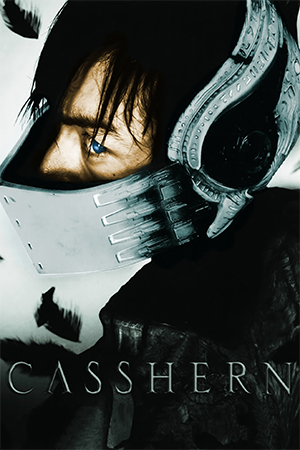 In a dystopic (aren’t they all?) future world, a war that has raged for 50 years between Europa and the Eastern Federation has come to an end with the latter finishing as the victors. Professor Azuma has been granted funding by the government to begin research on his proposed neo cell bio-technology that will allow him to grow human organs and body parts to cure any illness. He aims to use this technology to cure his terminally ill wife, Midori, but the government want to use it for military purposes. After a year of fruitless work a freak accident causes the pools of useless body parts to form together. Hordes of fully grown humans start emerging from the ooze and are soon slaughtered by the governments soldiers. While this is happening Azuma takes his dead son’s body, who was killed during the war, to the lab and puts it in the life giving mixture. He’s miraculously brought back to life and with the aid of some high tech body armour is reborn as Casshern. Meanwhile, of the newly created super humans only four manage to survive and escape, taking Casshern’s mother with them, to a castle in the mountains. They name themselves ‘neo-sapiens’ and vow revenge on all mankind.

‘Casshern’ is based on a 1970’s Japanese animated television series called ‘Neo Human Casshan’ created by Tatsuo Yoshida. This live action version is brought to life by first time director Kauaki Kiriya who is a veteran fashion photographer and music video director.  There are certain elements you may come to expect from movies that are directed by music video makers and the first is flashy and slick visuals.  In this respect the film isn’t likely to disappoint as in order to bring the story of ‘Casshern’ to life Kiriya has employed many different techniques. The film is a green screen production like ‘Sin City’ and ‘Sky Captain and the World of Tomorrow’ which means that computer images create almost everything you see on screen. Within this there are many different animation techniques on show including 2-D animation, cell shading and even stop frame animation. It works though as ‘Casshern’ is a stunning looking film. From the orange hues of the cityscapes, the glowing, ethereal woods to the grainy black and white war scenes everything is richly detailed, filled with visual flourishes and superbly lit (Kiriya acted as cinematographer as well). It’s a treat for the retinas. Another thing you may expect, although it isn’t always the case, from a director of music videos is a good soundtrack. For ‘Casshern’, there is some beautiful, haunting music throughout the film, some European classical music and some pumping distorted guitar tracks when a bit of action as about to flare up. Japanese popstar Utada Hikaru, wife of the director Kiriya, also supplies a suitably tender and moving song over the closing credits.

Although the dazzling visuals are the main draw this isn’t a case of all looks and no brains. The main themes are the futility of war and how violence only leads to violence. These are rather obvious and too simplistically presented to carry any real weight. Where the film does work is as a tale of love, loss and compassion. This gives the film some much needed heart that prevents it feeling like a 2 hour technical demo. There isn’t a great deal of action on show but what there is mostly very good. The first action sequence, a one on one fight with a female neo-sapien, utilises choppy editing which makes the scene a little confusing and unsatisfying. The real action highlight is when Casshern gets stuck into destroying an army of giant robot soldiers. He chops, rips and shoots through the legions to explosive and exciting effect. It’s just a shame there aren’t a few more scenes like this.

Kiriya has created a sumptuous and pessimistic world (on an apparently meagre budget of $6 million) where men are selfish, warmongers and the cause of the worlds problems and women are the compassionate, caring heart. It’s certainly worth spending some time in even just for the fantastic visuals on offer but may also draw you into the melancholic characters and the sombre story right up to its tragic conclusion.